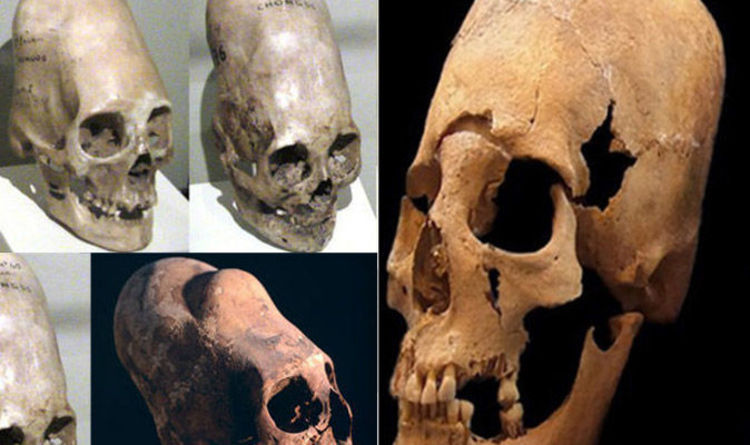 
The bizarre “cone-shaped skull” was unlike anything seen in northern Europe.

But, scientists have finally revealed the remains are not alien, as claimed by some conspiracy theorists, and are instead those belonging to a woman who had her skull elongated as a baby by a device.

It is believed the woman was forced to wear a construction which shaped the skull into an egg shape while she was at a young age, Dailystar.co.uk reports.

Such body modification was once seen as a sign of beauty and nobility, according to the findings.

The report said: “Artificial cranial deformation, which is only possible during early childhood, is a deliberate and permanent shaping of the head performed with great effort.

“In some societies reshaping the human skull has been seen as an ideal of beauty, while it may also have acted as a marker of status, nobility, or affliction to a certain class or group.”

The findings appear to back those of US elongated skull researcher Brian Forester, who traced a connection through DNA between 3,000-year-old skulls found in Paracas, Peru, and mainland Europe.

The Paracas skulls were discovered on the desert peninsula of Paracas, on the southern coast of Peru, by native archaeologist Julio Tello in 1928.

The skulls are another example of intentional cranial deformation, as seen among many ancient South American tribes.

Mr Foerster originally thought they could be alien in origin.

However, as director of the Paracas History Museum, he released details of DNA tests he said were carried out in conjunction with the Peruvian Government and he appears to now accept they were probably human in origin.

In two video updates about the DNA, Mr Foerster made no mention of extraterrestrials.

He described how the Paracas skulls appeared to share DNA links with other elongated skulls found between the Black Sea and the Caspian Sea.

Speaking at the Elongated Skulls Symposium in Los Angeles, Mr Foerster said: “What it does show for sure is that the Paracas elongated skull people were not 100 per cent Native American.

“They were a mix or even you could say, in some ways, a hybrid of different people.

“Their blood types are very complicated as well, they should be blood type O if they’re 100 percent Native American and that’s not the case.

“We are likely looking at a sub-species of humanity as regards to the Paracas. It seems to be a lot of DNA evidence from extreme eastern Europe and extreme western Asia.

“More specifically I’m talking about the area in between the Black Sea and the Caspian Sea where ancient elongated skull people lived I think about 3,000 years ago.

“So I think we are looking at a migration pattern starting in the Caspian Black Sea area and then entering through the Persian Gulf and then moving eastwards eventually winding up on the coast of Peru.”

Archaeologist Mr Tello found more than 300 of the odd skeletal remains in a complex grave system in 1928.