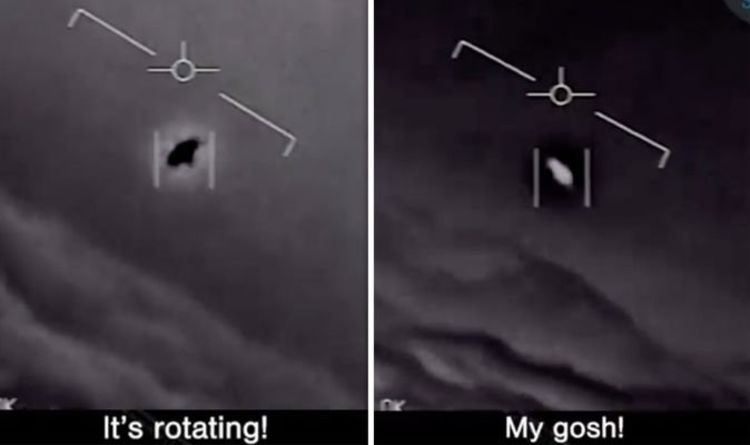 The clips of the UFO are from 2004 in California and 2015 in Florida respectively and recently sparked a barrage of alien conspiracy theories. This week the Navy confirmed that the videos were authentic as viewers attempt to gauge whether this marks proof of aliens visiting Earth. Senator Mark Warner, the vice-chairman of the Senate Intelligence Committee was brief on the phenomenon in addition to the staff of the Armed Service and Defence Appropriations.

A spokesperson for Mr Warner said: “If naval pilots are running into unexplained interference in the air, that’s a safety concerned Senator Warner believes we need to get to the bottom off.

Unidentified flying object briefings have been on the rise since it was revealed that the Pentagon’s secretive Aerospace Threat Identification program continues to investigate reported sightings of unknown aircraft.

Ed Booth, an aviation expert for News4Jax studied the shocking footage and insisted that Navy Pilots are instructed to report on these sightings.

He added: “What this object is that shows up in this video remains to be seen.

The Navy have insisted the UFO footage is genuine (Image: NAVY)

Donald Trump admitted to being briefed on the UFO’s earlier this year (Image: ABC)

US president Donald Trump discussed the UFO reports with ABC News in June as he explained he had been briefed on the matter.

He said: “I want them to think whatever they think.

Pilots announced their surprise after encountering the UFOs (Image: NAVY)

“I did have one very brief meeting on it, but people are saying they’re seeing UFOs.

“Do I believe it? Not particularly.”

The Navy have updated their guidelines regarding reporting UFOs (Image: Getty)

“They see things a little bit different from the past, so we’re going to see, we’re watching and you’ll be the first to know.”

A Navy spokesman explained that the reporting on UFOs would fall under “privileged and classified information”.

This is so that the military aviation safety organisation can “preserve the free and honest prioritisation and discussion of safety among aircrew”.

The Navy spokesman added the new guidelines are a response to unknown, advanced aircraft flying into or near Navy strike groups of classified or sensitive military facilities.

Secret Clues in Tutankhamun’s Tomb Reignite The Idea That Nefertiti Is Hidden Nearby : ScienceAlert
Long COVID Is Still Raising More Questions Than Answers, Say Researchers : ScienceAlert
We Just Got Our Closest View of Europa in 20 Years, And We Can’t Stop Staring : ScienceAlert
Hubble And Webb Pics Reveal DART Impact Was Even Bigger Than Expected : ScienceAlert
Biology Inspires a New Kind of Water-Based Circuit That Could Transform Computing : ScienceAlert