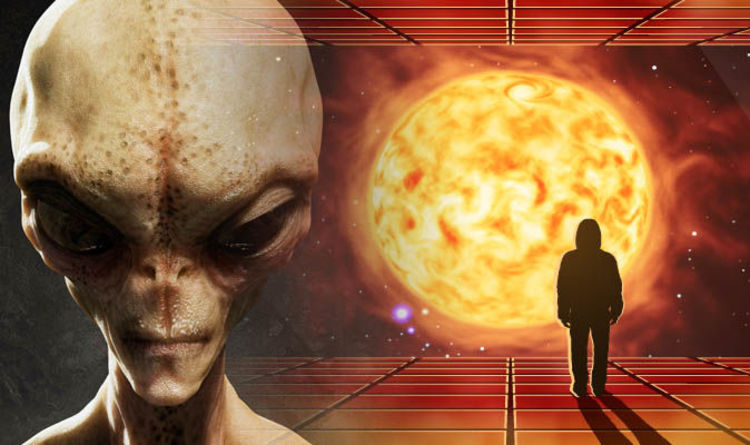 
Dan Hooper, a scientist at the US Fermi National Accelerator Laboratory, suggested extraterrestrials could store and collect stars through technology knows as Dyson Spheres.

Dyson spheres are theoretical structures capable of confining a star to syphon its vast stores of energy.

In a pre-publication research paper, Dr Hooper theorised alien species use Dyson spheres to stay ahead of expanding space.

Dr Hooper wrote: “The presence of dark energy in our universe is causing space to expand at an accelerating rate.

“As a result, over the next approximately 100 billion years, all stars residing beyond the Local Group will fall beyond the cosmic horizon and become not only unobservable, but entirely inaccessible, thus limiting how much energy could one day be extracted from them.

“Here, we consider the likely response of a highly advanced civilisation to this situation.

“In particular, we argue that in order to maximise its access to useable energy, a sufficiently advanced civilisation would chose to expand rapidly outward, build Dyson Spheres or similar structures around encountered stars, and use the energy that is harnessed to accelerate those stars away from the approaching horizon and toward the centre of the civilisation.”

According to the hypothetical scenario, technologically advanced alien species could target stars smaller than that in our solar system to utilise their incredible power.

Research on the presence of dark matter in the universe suggests space is rapidly expanding and the distance between planets and stars is growing.

The so-called Hubble Constant, first introduced by astronomer Edwin Hubble in 1992, claims the universe is growing at a rate of 68km/s.

The expansion is understood to be an aftermath of the Big Bang when the universe erupted into the existence.

More recent estimates on the rate of expansion peg the number in the range of about 71.9km/s (44.7 miles/s) but different measurements appear to give different results.

Sherry Sulu, of the Mx Planck Institute, said: “The expansion rate of the universe is now starting to be measured in different ways with such high precision that actual discrepancies may possibly point towards new physics beyond our current knowledge of the universe.”

Dr Hopper agued within around 100 billion years from now, all matter which is not gravitationally bound to the Milky Way Galaxy will “casually drift away” into the void.

Dyson sphere-bound stars could circumvent this problem by creating gravitational pools around which civilisations could gather.

The scientists wrote: “Given the inevitability of the encroaching horizon, any sufficiently advanced civilisation that is determined to maximise its ability to utilise energy will expand throughout the universe, attempting to secure as many stars as possible before they become permanently inaccessible.

“To this end, they could build Dyson Spheres or other such structures around the stars that are encountered, and use the energy that is collected to propel those stars toward the centre of the civilisation, where they will become gravitationally bound and thus protected from the future expansion of space.”

Astronomers See a Star’s Final Scream Into a Black Hole Halfway Across The Universe : ScienceAlert
A Strange Thing Happens to Wolves Infected by Infamous Mind-Altering Parasite : ScienceAlert
Do You Need to Drink Eight Glasses of Water a Day? It’s Complicated : ScienceAlert
Mars Once Had So Much Water, It Could Have Been An Ocean World, Scientists Say : ScienceAlert
Forests at Risk of Burning an Extra 30 Days a Year Without Climate Action : ScienceAlert