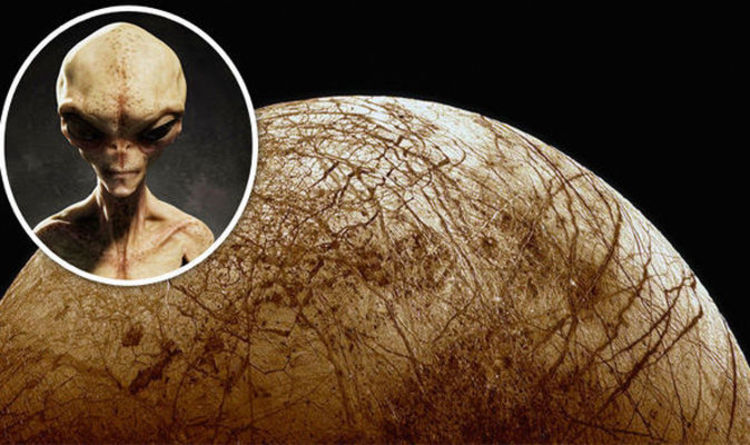 
In 1997, NASA’s Galileo spacecraft completed a flyby of Europa and data from the mission shows there was a bend in the moon’s magnetic field.

By analysing the data again, researchers believe the bend could have been caused by a water geyser gushing out of Europa’s icy surface.

Planetary scientist Elizabeth Turtle, of Johns Hopkins University Applied Physics Laboratory, said: “We know that Europa has a lot of the ingredients necessary for life, certainly for life as we know it. There’s water. There’s energy.

“There’s some amount of carbon material. But the habitability of Europa is one of the big questions that we want to understand.

“And one of the really exciting things about detection of a plume is that that means there may be ways that the material from the ocean – which is likely the most habitable part of Europa because it’s warmer and it’s protected from the radiation environment by the ice shell – to come out above the ice shell.

“And that means we’d be able to sample it.”

NASA is planning a mission to Europa, one of 53 confirmed moons of Jupiter, which could launch by 2024.

When NASA first announced it was going to Europa, it said that there are three objectives from the potential mission: to discover whether there is, or has ever been, life on Europa, to assess whether the celestial body is habitable, and to analyse the surface of the moon for future missions.

The space agency said in a statement: “Europa may hold the clues to one of NASA’s long standing goals — to determine whether or not we are alone in the universe.

“The highest-level science goal of the mission presented here is to search for evidence of life on Europa.

“This mission would significantly advance our understanding of Europa as an ocean world, even in the absence of any definitive signs of life and would provide the foundation for the future robotic exploration of Europa.”

Cannabis For Pain Relief? Review of 20 Studies Provides Sobering Results : ScienceAlert
The Science Behind Why You Sprain Your Ankle So Often, And What You Can Do About It : ScienceAlert
A Tobacco Plant Has Been Engineered to Produce Cocaine in Its Leaves : ScienceAlert
Do You Need to Drink Eight Glasses of Water a Day? It’s Complicated : ScienceAlert
Octopus Brains Evolved to Share a Surprising Trait in With Our Brains : ScienceAlert