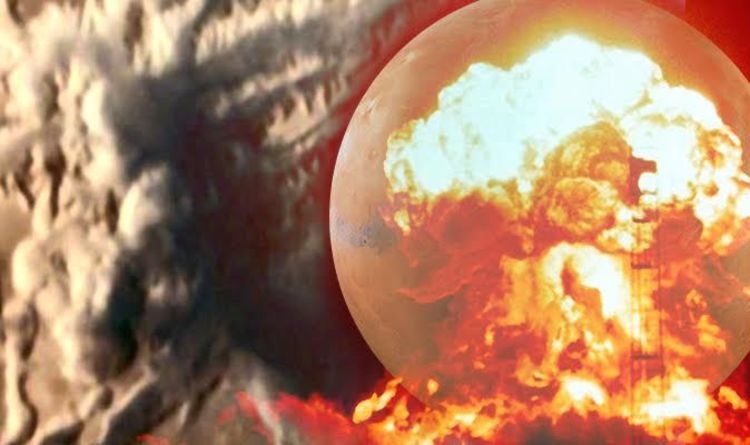 
The theory has been going for a number of years but more people are claiming they now believe.

Mars is inhabitable due to its lack of atmosphere and surface water.

But staggering video footage has sought to prove an advanced civilisation once lived there.

In the clip, on YouTube, the conspiracist reveals: “Mars shows signs of scarring that would only come from nuclear impact.”

The so-called war could even be ongoing, or so the conspiracist claims, Dailystar.co.uk reports.

He added: “But who’s to say the war is ancient?

“The war could even still be going on.”

The clip was uploaded to YouTube channel Disclose Screen last month and has gained popularity recently.

One crazy element of the theory is images of Mars released from India show a nuclear bomb mushroom cloud rising from the planet’s surface.

The image is a zoomed in section of Valles Marineris 2,500-mile long canyon on Mars which have been uploaded to the website of the Indian Space Research Organisation.

Youtube channel UFOvni Disclosure has published a short film showing the “cloud of smoke” which it claims is either an extra-terrestrial methane or nuclear explosion.

Subtitles on the video say: “India’s Mars orbiter captured something strange in the gigantic Valles Marineris Canyon of Mars. The image shows a huge mushroom cloud and we may wonder whether it is an enormous rare dust wind cloud, or caused due to a nuclear or methane explosion.”

But it has been quickly debunked as an optical illusion by scientists across the world.

Dr Jonti Horner, astronomer at the University of Southern Queensland, Australia, said: “Fun as it would be to imagine that this is evidence of nuclear weapons on Mars, or even the impact of a chunk of Comet Siding Spring smashing into the planet, that’s sadly just not the case.”

He said looking at high-resolution images of the same part of the canyon, showed the “cloud” was nothing more than an optical illusion at the junction of a crater with the trench.

One of the most prominent supporters of the Mars nuclear war theory is US Physicist Dr John Brandenburg.

In 2015 he published a book called “Death on Mars, The Discovery of a Planetary Nuclear Massacre”.

He argues the Red Planet was once occupied but wiped out by visitors from outer space who could destroy Earth.

US-based Dr Brandenburg gives lectures across the globe offering a theory that there is evidence of two major nuclear blasts on the Red Planet, and the archaeological relics left behind by the ancient Martians.

Mr Brandenburg believes the nuclear war took place about half a billion years ago and the traces of the blast have been left in two key locations.

The plasma physicist claims “anyone who can read a map” can see the the nuclear explosion sites.

JWST Has Found Life’s Elemental Building Blocks in The Depths of Darkest Space : ScienceAlert
Hypertension Drug Shown to Extend Lifespan And Slow Aging in Animals : ScienceAlert
Mysterious ‘Zone of Uncertainty’ Inside The Brain Reveals a Surprise : ScienceAlert
Our Body Temps Have Been Dropping For 160 Years. Gut Microbes May Be Playing a Role : ScienceAlert
‘Funky Worm’ Fossil Helps Explain The Mysterious Origins of Amphibians : ScienceAlert