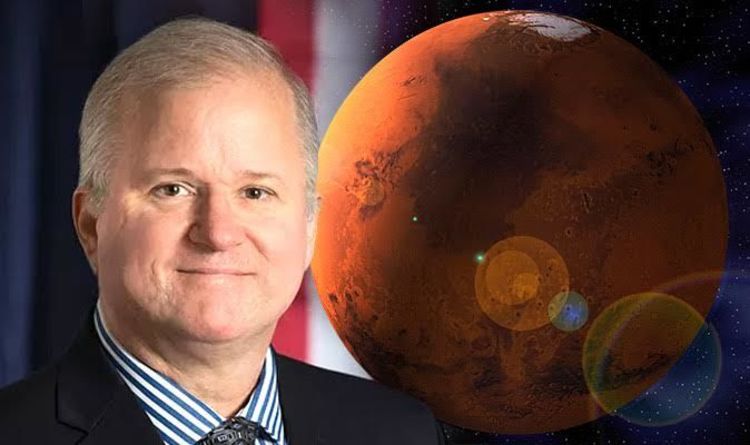 
But he bizarrely claims that as a child in the 1960s he took part in an alleged CIA programme called Project Pegasus in which he travelled through space and time.

Mr Basiago, who claims time travel has been possible since then, said during his college years in the 1980s, he took part in another CIA project – the Mars Jump Room Program – which was part of an alleged secret space programme to send people to Mars.

Conspiracy theorists claim billions of dollars each year are mysteriously moved from the US Pentagon budget to fund so-called black space projects that have seen humans travel deeper into space than most of us would believe.

The theory claims NASA projects the public learn of are just a diversion from what we are really capable of.

He said: “I certainly never saw anything like that on Mars the 40 or so times that I went there 30 to 35 years ago.”

However, he said he had written a paper – The Discovery of Life on Mars – in 2008, which had evidence of a mass grave on the Red Planet.

He said: “I show that in a ravine west of the Home Plate in the Gusev Crater on Mars, there was a mass grave of several hundred humanoid bodies, both male and female, clothed in uniform blue clothes suggestive of regimentation.

“So I would urge objectified open mindedness. It’s a crazy concept to believe it’s not just Earthlings who have been kidnapped here, abducted here on Mars, but there might be children who have been enslaved there.

“The fact there was this ravine full of bodies that could have been an open air cemetery, a place of ritual human sacrifice or some genocide killing field has been in the pub domain now for 10 years, but has largely been ignored, I think because we are to easy to indulge in the giggle factor when those types of facts surface.”

In 2008 he submitted the scientific paper which claimed to prove there were an array of creatures and humanoids living on Mars the the National Geographic Society, but they declined on grounds Mr Basiago was just experiencing pareidolia.

In almost identical research to Scott C Waring, editor if Ufosightingsdaily.com, Mr Basiago has spent hours looking at images taken by the NASA Spirit and Curiosity rovers on Mars and felt he spotted living things, NASA had overlooked.

However, pareidolia is when the brain tricks the eyes into seeing familiar objects or shapes in textures or patterns such as clouds or a rock surface.

Each year there are several conferences held around the secret space program, but there is no firm evidence for its existence.

Equally, there is no evidence to suggest any human has landed on Mars.

Mr Basiago made a series of shocking claims during a Q&A with a panel of so-called whistleblowers at the Mutual UFO Network (MUFON) Symposium.

Mr Basiago introduced himself to the audience as “a trial lawyer admitted at federal and state level in Washington state USA”.

Speaking in a deadpan voice, he said: “I had two different periods of service in the secret space program, time travelling as a child in the late 1960s and early 1970s and going to Mars as a college student in the first half of the 1980s.

“We landed on Mars in 1964 – the documentary source I can cite, but can’t proffer is a French external intelligence organisation dossier I was asked to read in the summer of 1980 which was also read by the future President Barack Obama which referred to a crash landing by an American team of astronauts on Mars who perished because they were not rescued by the Martain humanoids.”

He was then asked by a woman in the audience who claimed to be an alien contactee if it were true that there are races of aliens who enslave human adults and children and where they get them from.