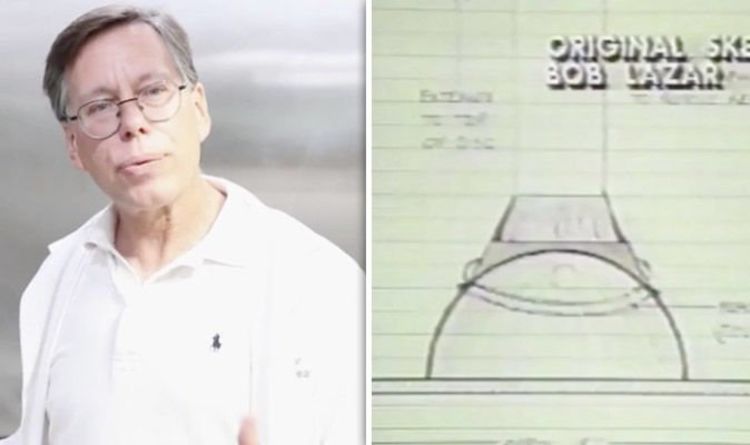 
Bob Lazar sparked an alien frenzy 30 years ago when he claimed to be working on reverse engineering UFOs inside Area 51. In 1989, with the help of journalist George Knapp, Lazar detailed a story claiming he was stationed at a base known as S-4, south of the USAF’s Homey Airport. He speculated the auxiliary facility in the Nevada desert was being used by the US government to exploit alien technology.

However, following the revelation, Lazar went quiet for almost 30 years.

With the help of investigative filmmaker Jeremy Corbell, the scientist has revisited his claims.

In the documentary, which was released on December 3, Mr Lazar revealed specific details on his supposed work at Area 51.

He said: “The first time they showed me the reactor, I saw a sphere on the top and they asked me to try and touch it.

“You couldn’t [touch it], your hand was just pushed away, like two opposite magnets.

“It was the exact same feeling, but there was no metal involved – that’s the shocking thing.

“Nothing does that – it’s an operating force field.”

Mr Lazar revealed how the finding sent his mind into overdrive about its potential use in today’s world.

He added: “Immediately it provokes that whole chain reaction in your mind.”

“If you can do this (sic), there can be force fields in tanks, we can have things that lift off the ground.

“We don’t need jet or rocket engines anymore and there are no use for cars.

“The whole thing changes the entire world just if we had an answer for how it is done.”

Two weeks ago, Lazar travelled to Los Angeles with Mr Corbell and Mr Knapps to attend the premiere of the new film at the Ace Hotel in Los Angeles.

The next day it was released on iTunes and immediately rose to number one on the charts.

Mr Corbell previously said: “My film gives you an understanding of the real Bob Lazar, which will make it harder to throw away his claims.

The Last Known Tasmanian Tiger Was Just Found in a Museum Cupboard : ScienceAlert
Scientists Reconstructed a 2 Million-Year-Old Ecosystem From Ancient DNA : ScienceAlert
Millions of ‘Silent Synapses’ Could Be The Key to Lifelong Learning : ScienceAlert
Colossal Discovery on Mars Could Drive Surging Magma Under The Surface : ScienceAlert
Dropping Oxygen Will One Day Suffocate Most Life on Earth : ScienceAlert