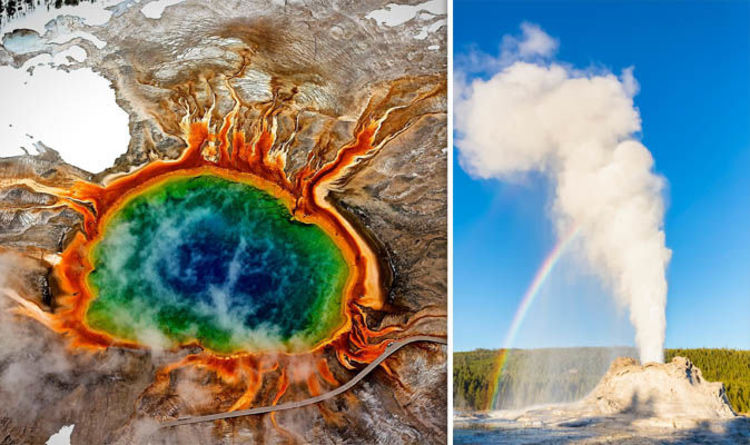 
Yellowstone volcano scientists at the United States Geological Survey (USGS) revealed how they use novel satellite and radar tools to measure ground deformation and uplift at the National Park.

The revelations were outlined on Monday, May 28, in the weekly column Yellowstone Caldera Chronicles by geologist Dan Dzurisin.

The ground deformation update comes off the back of Steamboat Geyser’s seventh eruption in the national park’s Norris Geyser Basin.

The unsettling pattern of activity from the world’s tallest active geyser prompted messages of worry and concern on online social media platforms.

Dominic Iannaco, @BrickHero1, tweeted at the USGS asking: “This volcano talk has really gotten me nervous about Yellowstone’s volcano.

“Is it going to erupt soon because of the geyser activity?”

But the seemingly facetious message was met with a harsh backlash from the USGS, which quickly stressed there are no imminent signs of a Yellowstone Volcano eruption.

The USGS said: “No one is doomed. While it’s unusual for Steamboat to be erupting so frequently given its eruption patterns for the last few years, it is completely normal for geysers to change there eruption patterns.

“There is no unusual volcanic activity at Yellowstone National Park right now.”

The agency added in another tweet: “We’ll say it again: Yellowstone is not going to erupt.

“It is one of the best-monitored volcanoes in the world, and we would see signs of volcanic activity long before they became dangerous.

“Hydrothermal activity like geyser eruptions is part of the normal routine of this volcano.”

The volcanic agency underlined geyser eruptions at Yellowstone are all part of the natural cycle even if thrown off balance with unusual activity.

“People should not be worried it means that Yellowstone is heading towards any eruption.”