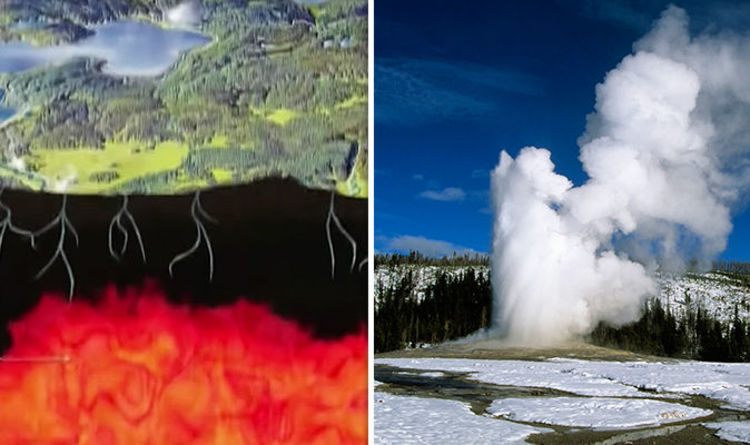 
The Yellowstone volcano in Wyoming, USA, is one of the world’s most feared volcanoes and is so powerful that even hydrothermal explosions can blast debris two kilometres into the sky.

“But the source of that heat is a super volcano fed by a massive magma reservoir.

“If it erupts it could spell disaster for humanity. While scientists agree it is unlikely to happen any time soon an eruption would shoot more than one thousand cubic kilometres of rock and ash into the air – likening the skies of the United States and creating a volcanic winter over the planet.”

University of California Santa Barbara geologist James Kennett said: “We discovered here that there are two ash-forming super-eruptions 170 years apart and each cooled the ocean by about 3 degrees Celsius.”

The discovery was made after research found two distinct layers of ash on the seafloor of the Santa Barbara Basin.

NASA researchers have proposed a solution to the threat, with the space agency set to drill into the sides of the volcano in order to pump water down under high pressure to lower the temperature of the volcano.

The ambitious plan is to “prevent a future supervolcano eruption which would devastate humanity”.

NASA’s plan to cool down the supervolcano is set to cost around $3.46 billion.

Brian Wilcox of NASA’s Jet Propulsion Laboratory told the BBC: “Building a big aqueduct uphill into a mountainous region would be both costly and difficult and people don’t want their water spent that way.

“People are desperate for water all over the world and so a major infrastructure project, where the only way the water is used is to cool down a super volcano, would be very controversial.”

Yellowstone National Park lies on a magma reservoir that creates geysers and hot basins and is able to destroy humanity.

The United Nations has estimated that an eruption could leave the country with enough food reserves for 74 days.

Mr Cox also said: “You would have to give the geothermal companies incentives to drill somewhat deeper and use hotter water than they usually would, but you would pay back your initial investment, and get electricity which can power the surrounding area for a period of potentially tens of thousands of years. And the long-term benefit is that you prevent a future supervolcano eruption which would devastate humanity”.

Yellowstone’s Ear Spring geyser burst back to life on September 15, the fourth eruption in 60 years.

The US Geological Survey said in a statement: “Ear Spring, normally a docile hot pool, had a water eruption that reached 20 to 30 feet high on Saturday, September 15, 2018.

“The eruption ejected not only rocks, but also material that had fallen or been thrown into the geyser in years past, like coins, old cans, and other human debris.”

While the geyser is likely the result of normal seismic activity in the area, any movement relating to Yellowstone prompts concern over what could be the most catastrophic eruption of all time.

Plants Have Been Keeping a Secret From Us About How Thirsty They Actually Are : ScienceAlert
Record-Breaking Experiment Could Solve a Huge Challenge in Quantum Computing
New Predictions Reveal The Fate of The World’s Biggest Ice Sheet if We Don’t Act : ScienceAlert
This Artificial Synapse Can Run a Million Times Faster Than Ones in The Human Brain : ScienceAlert
An Experimental Surgical Robot Is Headed to The International Space Station