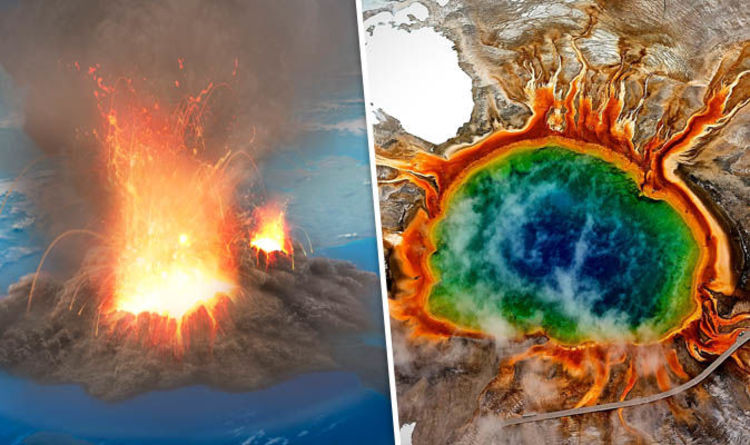 
A Yellowstone volcano eruption could be one of the deadliest natural catastrophes to strike the United States and the world – if it ever happens.

Geologists who monitor the vast supervolcano complex in the Northwestern US have no way of telling if the volcano will ever roar back into life.

But the United States Geological Survey (USGS) and Yellowstone Volcano Observatory (YVO) are tasked with keeping a watchful eye on the potential threat.

Bearing in mind the devastating potential of the erupting supervolcano, the two agencies said they cannot dismiss the possibility of Yellowstone erupting again in the future.

Past caldera-forming eruptions at Yellowstone are believed to have occurred 2.1 million years ago, 1.3 million and 640,000 years.

Volcanic ash rejections from these monstrous blasts covered much of Western America “a third of a meter deep several hundred kilometres” from Yellowstone.

The likelihood of this happening once again are about one in 730,000 each year.

But with these past eruptive indicators in place, the thought of Yellowstone erupting once again in our lifetime is an extremely terrifying idea.

How big would another Yellowstone eruption be?

According to the USGS, the state of current volcanism at Yellowstone National Park points towards at least three different eruption scenarios.

The least likely but also the worst-type of eruption that could tear through Yellowstone is another caldera-forming explosion.

An eruption on this scale would likely alter global weather patterns and have a devastating effect on human agricultural output.

Thankfully, the USGS said: “The probability of such an eruption in any given century or millennium is exceedingly low.”

The most likely type of major eruption at Yellowstone will probably be a hydrothermal one – an explosive blast of hot water and steam and not molten rock.

Smaller examples of such hydrothermal eruptions occur at Yellowstone on daily basis, namely whenever one of Yellowstone’s geysers erupt.

The USGS said: “Such explosions could blast off shallow craters more than a kilometre wide; as has occurred in the northern Yellowstone Lake Basin, including Mary Bay and nearby Turbid Lake and Indian Pond, and in western Yellowstone National Park north of Old Faithful.”

All of these hydrothermal craters were created by powerful blasts of scorching steam over the past few thousand years.

The third type of eruption that could rock through Yellowstone is a volcanic release of rhyolite or basalt.

The USGS said: “Such eruptions could range in size from smaller than the 1980 eruption of Mt St Helens though much larger than the 1991 Mount Pinatubo eruption.”

But all of these scenarios at this point in time are purely hypothetical guesses about the future of Yellowstone volcanism.

For the time being, the YVO has seen no evidence of volcanic or seismic activity indicating a future eruption is at all imminent.