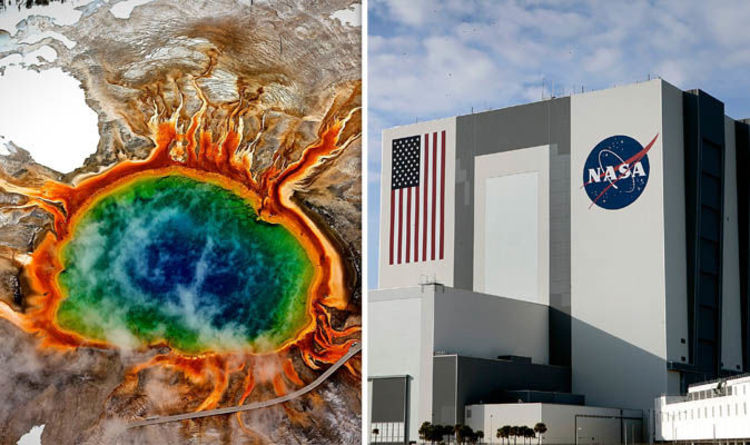 
Some geologists estimate the Yellowstone supervolcano erupts roughly ever 600,000 years and it last erupted 640,000-years-ago.

If Yellowstone erupted today, the volcano could alter weather patterns on a global scale, plunging the world into a farming crisis.

So what is being done to prevent or minimise the risk of Yellowstone volcano erupting?

In August 2017, space agency NASA suggested drilling holes into the Yellowstone caldera to pump it full of cold water.

The daring operation could potentially seep the volcano of its incredible heat, reducing the risk of eruption.

“Through drilling in this way, it could be used to create a geothermal plant, which generates electric power at extremely competitive prices of around $0.10/kWh.

“You would have to give the geothermal companies incentives to drill somewhat deeper and use hotter water than they usually would, but you would pay back your initial investment, and get electricity which can power the surrounding area for a period of potentially tens of thousands of years.

“And the long-term benefit is that you prevent a future supervolcano eruption which would devastate humanity.”

But the USGS is not convinced drilling into the supervolcano will have any benefits whatsoever.

The geological agency said cooling down magma reservoirs beneath the ground is an incredibly tricky operation, which may even increase the risk of eruption.

The USGS said: “Scientists agree that drilling into a volcano would be of questionable usefulness.

“Notwithstanding the enormous expense and technological difficulties in drilling through hot, mushy rock, drilling is unlikely to have much effect.

“At near magmatic temperatures and pressures, any hole would rapidly become sealed by minerals crystallising from the natural fluids that are present at those depths.”

Regardless of the science, it is highly unlikely anyone will be drilling into Yellowstone volcano any time soon.

Yellowstone National Park is protected from “geothermal resource development”, meaning building a power plant on top of the volcano will never happen.

The USGS said geothermal extraction might lower the existing underground pressure but could also wipe out many of Yellowstone’s world-renowned features.

The national park is home to tens of thousands of hydrothermal features and hundreds of geysers.

The USGS said: “The world-famous features, like Old Faithful Geyser and Grand Prismatic Spring, depend on heat provided by the magma chamber deep below Yellowstone’s surface.

“Any allowed geothermal extraction would lower the pressure on the existing geysers and hot springs, altering their behaviour and in many cases, causing them to disappear.”

Thinking Hard and Long Can Cause Brain Drain : ScienceAlert
The Moon Stole Something From Deep Inside Earth Eons Ago, and Scientists Can Prove It : ScienceAlert
An Experimental Surgical Robot Is Headed to The International Space Station
Astronomers Charted The Sun’s Life, And This Is How The Story Ends : ScienceAlert
‘Structured Water’ Is Not What People Claim. Don’t Believe The Hype, Scientist Says