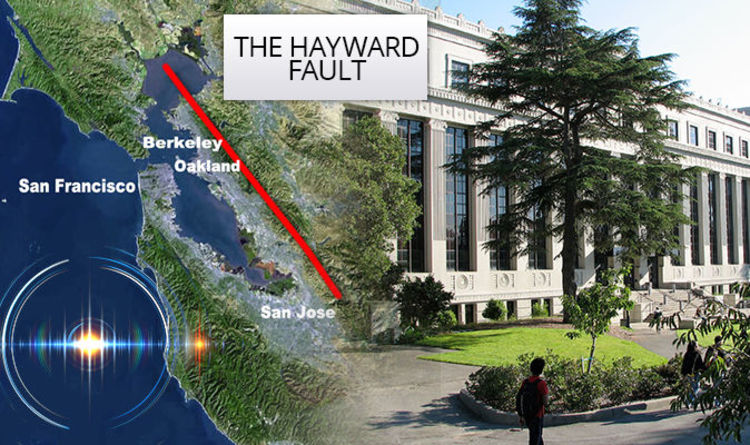 
More than 40,000 young people study at Berkeley, oblivious to the potentially catastrophic tectonic rumblings beneath their feet.

But scientists at the United States Geological Survey say a huge area of unstable rock, known as the Hayward Fault runs directly below the University campus and it is overdue a catastrophic quake. They add it could happen any day now.

The death toll of a major quake hitting this part of California could run into tens of thousands –The Hayward Fault was responsible for the most powerful earthquake in American history – which struck 150 years ago on December 21,1868 with a magnitude 6.8 on the Richter scale.

Damage covered the entire Hayward Fault line, which runs from north of Berkeley down to San Jose along a 74 mile stretch.

The Hayward Fault is considered one of the most powerful fault lines in the world, running parallel to the potentially catastrophic San Andreas fault, and 150 years almost to the day, researchers warn it is overdue a quake.

In 1868, the population living along the Hayward Fault was just 24,000. Today there are upwards of 2.5 million residents.

And a warning from the US Geological Survey (USGS) states the damage could be devastating.

Water, electricity and gas supplies will be affected, and buildings – even so-called quake-proof buildings – could come tumbling down.

Previous research has shown that a 7 magnitude quake today would result in at least 800 deaths and more than 18,000 injuries.

If an 1868-style quake were to hit today many public places could be damaged too.

An infrared map of the fault line shows it running through the University of California Berkeley football stadium – a venue which has a capacity of 62,467.

A spokesman for USGS said on the Survey’s website: “The 1868 earthquake still ranks as one of the most destructive earthquakes in California’s history, but this is not the end of the story. The Hayward Fault will rupture violently again, and perhaps soon.

“Such an earthquake could unexpectedly change people’s lives and impact the Bay Area’s infrastructure and economy.

“Hundreds of homes and other structures are built along the fault trace, and mass transit corridors, major freeways, and many roadways cross it at numerous locations.

“Ongoing slip and aftershocks along the Hayward Fault may last for months, further damaging buildings and infrastructure that straddle the fault.

“A second factor making the Hayward Fault so dangerous is that its most recent damaging earthquake was more than 150 years ago.

“USGS scientists have found evidence for 12 quakes on the southern Hayward Fault during the past 1,900 years.

Earth’s Oxygen Came From an Unexpectedly Deep And Hot Source, Study Suggests : ScienceAlert
Mummies With Golden Tongues Discovered in Ancient Egyptian Necropolis : ScienceAlert
Astronomers Spot The Biggest Galaxy Ever, And The Scale Will Break Your Brain : ScienceAlert
Cannabis For Pain Relief? Review of 20 Studies Provides Sobering Results : ScienceAlert
Chilling Glimpse Into Our Future if We Survive Another Million Years : ScienceAlert