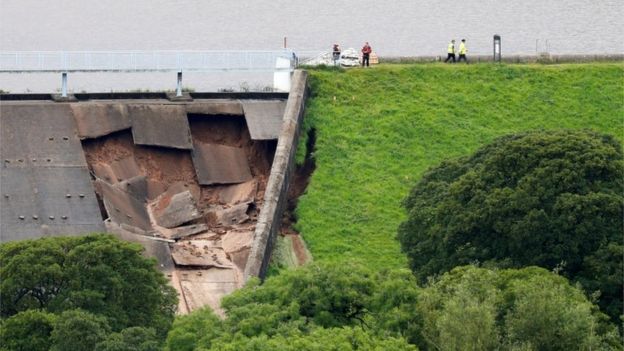 
That’s again an unprecedented emergency situation going on right now in the UK!

Thousands of people are being evacuated from Whaley Bridge in Derbyshire, because part of the 300-million-gallon Toddbrook Reservoir wall has collapsed in floods.

Engineers are pumping water from the 300-million-gallon Toddbrook Reservoir amid fears it could burst and swamp Whaley Bridge in Derbyshire.

Police have told the town’s 6,500 residents to gather at Chapel High School in the neighbouring town of Chapel-en-le-Frith , taking pets and medication with them.

A severe flood warning, which means a threat to life, has been issued for the River Goyt below the reservoir.

And this is what we know about this new disaster from Julie Sharman, chief operating officer of the Canal and River Trust:

According to officials, they have plans for every scenario including the dam, which holds back 1.3 million tonnes of water, collapsing.

Meanwhile, trains between Hazel Grove and Buxton have been blocked because of the flooding, affecting Northern train services between Manchester Piccadilly and Buxton.

There’s gridlock on the local roads at the moment – people are abandoning vehicles.

The dam is a mess and quite old. It was built in 1831 and is an earth-filled construction. It really looks very unsafe and there’s a lot of water in that reservoir.

The problem is the damage is high up. The key is to get the water levels down as fast as you can. But with the current rain… It’s pretty hard to do! The key will be to see if it holds overnight. If it does, there’s a good chance they can repair the dam but it will take months.

As councillor Martin Thomas explained: “The situation is an unfortunate combination of circumstances. We’ve had a lot of wet weather recently, the ground is saturated, the reservoir was already full. Something we previously looked at as a benign leisure facility suddenly becomes a real mortal danger.“

Ultra-Processed Food May Exacerbate Cognitive Decline, New Studies Show : ScienceAlert
Mysterious Medieval City in Africa Had a Genius System to Survive Drought : ScienceAlert
Wildfire Destruction in The Western US Has Doubled in Just 10 Years : ScienceAlert
High-Fat Diets May Break The Brain’s Ability to Regulate Calories : ScienceAlert
A Lost Interview With The ‘Father of The Big Bang’ Was Just Discovered : ScienceAlert