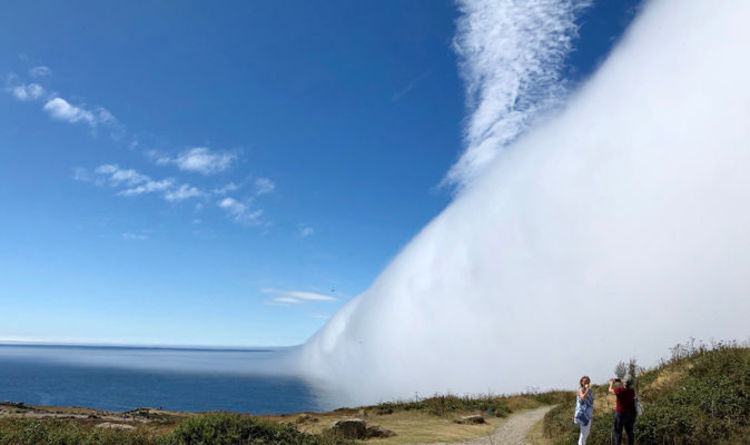 
While the UK was blessed with another weekend of stunning weather, one part of the country was treated to something extra special.

In Cornwall, a cloud rolled in from the sea, as if a tsunami of mist was approaching.

The strange phenomenon was spotted by thousands of beachgoers along the southwest of England and in some locations, such as Perranporth, people were stopped from going for a swim.

One witness, Johnny O’Shea said on Twitter: “Eerie sea mist over very busy Perranporth beach – @RNLI lifeguards have red flags out and say there are 4000 people on the beach.”

Local bar, The Watering Hole, spokesman Robert Job told Cornwall Live: “[It was closed because] they couldn’t see the sea and therefore couldn’t enter it safely.

“Some people were disgruntled, but they had to understand and they made up for it when the ban was lifted later in the afternoon.”

A spokesman for the RNLI said: “The beach at Perranporth was red flagged until 1pm yesterday due to the sea mist.”

Unfortunately for those in Cornwall, the mist could put a premature end to summer holidays as the Met Office says that it could stick around.

The weather forecaster said: “Evening sunshine will give way to lengthy clear periods initially, but low cloud is likely to become rather more extensive across Devon and Cornwall and along Bristol Channel coasts. Minimum temperature 14C.

“On Monday there’s still a risk of patchy low cloud in the west, but much of the region will see another sunny day.

“On Tuesday to Thursday it will still be warm, but fairly cloudy on Tuesday, perhaps with a few showers later.

“Distinctly cooler, breezier and showery on Wednesday and Thursday, though still with good spells of sunshine.”

Does IQ Decline as We Age? One Type of Intelligence Peaks in Your Twenties : ScienceAlert
Termites Love Global Warming So Much That They May Make It Worse, Says Study : ScienceAlert
There Are New FDA Safety Warnings About Breast Implants. Here’s What We Know : ScienceAlert
A Weird Blob of Hot Gas Is Whizzing Around Sagittarius A* With ‘Mind-Blowing Velocity’ : ScienceAlert
Scientists Are About to Fire Up The Most Powerful Laser in The US : ScienceAlert