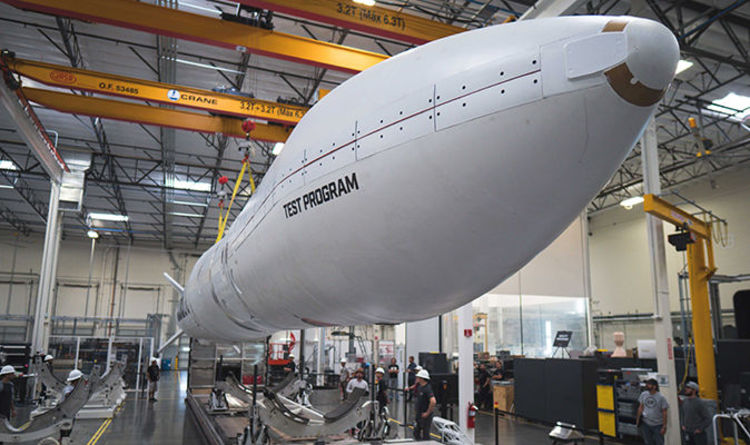 The entrepreneur was one step closer to launching commercial satellites from the LauncherOne rocket after the craft was successfully attached to a customised jumbo jet which will act as a flying launch site.

LauncherOne was “mated” for the first time with the converted Virgin Atlantic plane, named ‘Cosmic Girl’, in Long Beach, California, marking a massive milestone for the project.

When fully operational, LauncherOne will be flown by Cosmic Girl to a height of 30,000 ft where thrusters will engage, taking it to outer space.

Virgin Orbit CEO Dan Hart, an aerospace veteran with more than three decades of experience as both engineer and executive on Boeing’s Delta, missile defence, and other programs, said: “It took an incredible amount of planning and hard work to make today go so smoothly.

“Modelling and simulations are priceless tools, but nothing beats conducting real operations with real hardware.

“The fact that we shipped a rocket on this route, positioned it under the aircraft, integrated the system, and verified that that it all works together for the first time all within a single day still astounds me.

“In the traditional aerospace world, doing all of that would have taken weeks.”

The rocket is 70ft long, double the length of a London bus, and will travel 20 times the speed of sound – which equates to 17,000mph.

Weighing in at 57,000 pounds, the equivalent to 25 small family cars, LauncherOne’s payload will carry satellites which could be as small as a loaf of bread and as large as a household refrigerator.

The LauncherOne rocket will be capable of travelling at 20 times the speed of sound (Image: Virgin Orbit)

Satellites will deliver everything from internet in even the remotest regions to advanced weather tracking systems which will help monitor climate change.

The rocket is outfited and ready for flight on Cosmic Girl in the near future.

An extensive series of test flights will include a number of what Virgin refers to as “captive carry” flights – during which LauncherOne will remain attached the aircraft, gathering terabytes of valuable data about aerodynamic performance, structural loading, and more.

Several more rockets are already being built at Virgin Orbit’s rocket factory, located less than a mile away from Cosmic Girl’s spot on the tarmac at the Long Beach Airport.

The LauncherOne rocket is twice the length of a London bus (Image: Virgin Orbit)

Sir Richard Branson’s Virgin Group first began research into small satellite launch technology less than a decade ago, and began work on its innovative 747-launched system in early 2015, initially as a department within one of Virgin Orbit’s sister companies, Virgin Galactic.

The company already has hundreds of millions of dollars of launches on contract, for customers ranging from NASA and the US Department of Defense to new start-ups.

Writing on Virgin’s website last year, Sir Richard said: “During my recent visits, the superstar team of women and men at Virgin Orbit’s design and manufacturing facility in Long Beach, California has shown me the fantastic hardware they’ve built, tested, and improved upon.

“CEO George Whitesides’ stewardship of our space companies and the team’s progress in assembling LauncherOne helped us recruit a 34-year Boeing veteran, Dan Hart, to head up Virgin Orbit as president.

“We are all really excited to welcome Dan into the Virgin family.

By offering low cost and frequent service to space, the team is revolutionising the small satellite market within the promising space economy.

“And so it makes sense to support their growth by giving them their own company.”

Meanwhile, speaking earlier this month, Sir Richard said Virgin Galactic was “tantalisingly close” to realising his dream of manned commercial spaceflights, with the billionaire entrepreneur planning to be on one of the first rockets.

His stated aim of commercial space travel puts him in direct competition with Space X and fellow billionaire Elon Musk.

Mr Musk is working on the Falcon Heavy, which will be the world’s most powerful rocket when it’s ready later this year, with which he hopes to transport people into space and eventually colonise Mars.

The Science Behind Why You Sprain Your Ankle So Often, And What You Can Do About It : ScienceAlert
Scientists Revived Ancient ‘Zombie Viruses’ Frozen For Eons in Siberia : ScienceAlert
Mummies With Golden Tongues Discovered in Ancient Egyptian Necropolis : ScienceAlert
These Mysterious Fungi Belong to an Entirely New Branch on The Tree of Life : ScienceAlert
Cannabis For Pain Relief? Review of 20 Studies Provides Sobering Results : ScienceAlert