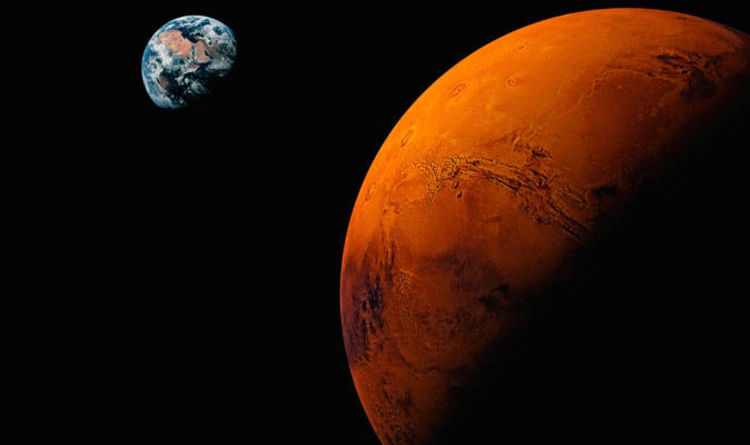 
Soon after the sun dipped below the Western horizon on Sunday, July 15, the crescent moon paired closely with the planet Venus.

The spectacle would have been best viewed through binoculars or a telescope.

Although the celestial duo appeared close, they in fact were not.

The Moon, near the closest point of its orbit, was 224,000 miles from Earth, but Venus, 88 million miles distant, is about 400 times farther away.

When does the moon pair with Mars?

Don’t worry if you missed this highlight, there are plenty more to come.

The moon will pair with Mars next week on Friday, July 27.

If you haven’t spotted Mars yet, you will soon as it’s rising earlier each night and getting brighter.

On July 27, the red planet will be at opposition and will make an exceptionally close pass by Earth, coming within 35.8 million miles of our planet.

This means Mars will appear at its biggest and brightest since 2003, even outshining giant Jupiter in the night sky for a few weeks.

The distinctly orange-hued planet will rise in the east as night falls and will be visible in the southeast sky within the constellation Capricornus.

High-magnification views of Mars through backyard telescopes will show off its distinct surface features, such as the ice-covered northern polar cap.

Also on this night, lucky sky-watchers across Europe, Africa, Asia, and Australia will get a front-row seat for the longest “blood moon” eclipse of the century.

Those in Europe will see the partially eclipsed moon rise and then witness totality.

Next up, however, it’s Jupiter’s turn, aligning with the moon on Friday, July 20.

After that, it’s Saturn’s turn, as the planet pairs with the moon on Tuesday, July 24.

Saturn was at opposition only a few weeks ago, so the ringed planet and its larger moons will still make great targets for sky-watchers with backyard telescopes.

We Have Our First Look at Neptune’s Rings in 33 Years, And They’re Glorious : ScienceAlert
How Many Ants Live on Earth? Scientists Came Up With an Answer : ScienceAlert
This Is How Much Fossil Fuel The World Is Sitting on, And It’s a Time Bomb : ScienceAlert
There Are New FDA Safety Warnings About Breast Implants. Here’s What We Know : ScienceAlert
The Tonga Eruption’s 50 Million Tons of Water Vapor May Warm Earth For Months to Come : ScienceAlert