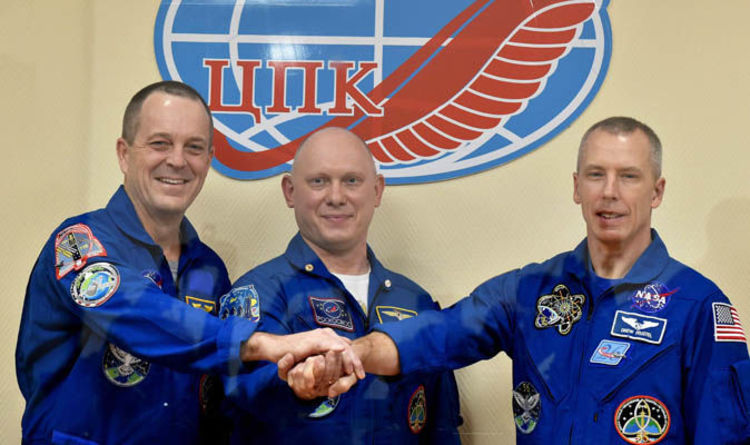 The mission comes at a time of strained relations between Russia and the West, with the country blamed for the poisoning of a former Kremlin spy in Salisbury and meddling in the US election.

In a neutrally worded tweet, the American space agency said: “Three people will leave planet Earth (on Wednesday) for a journey to humanity’s orbiting laboratory – the @Space_Station.”

The trio, who were pictured putting their hands together as they prepared for their flight, are scheduled to arrive at the ISS on Friday.

The crew will be greeted by station commander Anton Shkaplerov of Roscosmos, Scott Tingle of Nasa and Norishige Kanai of the Japan Aerospace Exploration Agency.

While circling the Earth 240 miles up, the members of Expedition 55-56 will continue work on the hundreds of experiments aboard the ISS.

The United States recently imposed fresh sanctions on Russia after a probe into meddling in the 2016 election of Donald Trump.

Meanwhile the UK and Russia have been involved in a tit-for-tat expulsion of diplomats as part of a row over who was responsible for the attempted assassination of Sergei Skripal.

Bar Graphs Induce a Hidden Bias in Interpretation, Experiment Shows : ScienceAlert
A Lost Interview With The ‘Father of The Big Bang’ Was Just Discovered : ScienceAlert
Mysterious Medieval City in Africa Had a Genius System to Survive Drought : ScienceAlert
A Billion-Dollar Biotech Company Plans to Bring The Dodo Back to Life : ScienceAlert
Our Body Temps Have Been Dropping For 160 Years. Gut Microbes May Be Playing a Role : ScienceAlert