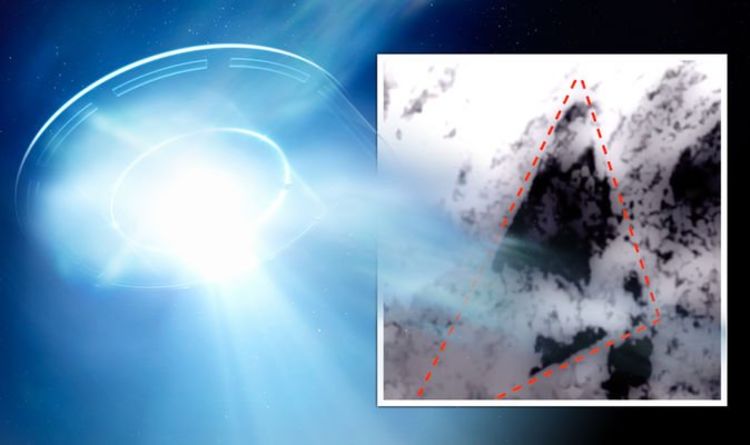 
The UFO-spotting phenomena shows no signs of slowing-down. And well-known UFO proponent Scott C Waring has this week produced yet more “proof” of alien spacecraft visiting Earth. The latest video posted to Waring’s popular ufosightingsdaily.com site purports to show an enormous UFO rising out of the Pacific Ocean.

Waring wrote: “Imagine this … a triangle the size of a island rises out of the Pacific Ocean in front of your eyes. This is what happened to Youtuber MrMBB333 this week.

“As you see from the video below, this dark triangle rose up from the ocean and hovered for seven full hours before disappearing.”

The UFO conspiracy theorist proceeds to outline the reasons the alien spacecraft would require to break cover for so long.

He wrote: “The ship cannot enter space when water is still on the ship or it will disrupt their electrical shields and could compromise the ships outer hull if it freezes in space.

“Imagine a ship traveling at the speed of light…can you imagine how cold that water would get on the outer hull and how it could throw off navigation too?

“Yeah, so the giant ship waited for the water to drain off of it. Must have been as big as an island.“

User Richard Roberts commented: “I think what is most concerning to me is the size of that anomaly.

“I went on google earth and matched the radar image and that anomaly is approx. 900-1000km long. Yikes!”

Viewer Dozy wazzock wrote: “Triangles really seem to be the shape of choice for unusual Ariel phenomena lately, it’s uncanny, and some of them are huge, like the one in this video.

The YouTube viewer commented: “That thing is huge and sticks out like a sore thumb!!! I’m thinking military craft TR3b.”

People Are Still Terrible at Correctly Using Medical-Grade Face Masks And Respirators
Climate Change Is Turning Parts of Antarctica Green, But It’s Not Grass
SpaceX Is About to Launch Two Astronauts Into Space in a Historic First
Engineers Successfully Test New Chip With Download Speeds of 44.2 Terabits Per Second
Many Astronomers Now Think Planet Nine Might Not Exist After All, Here’s Why