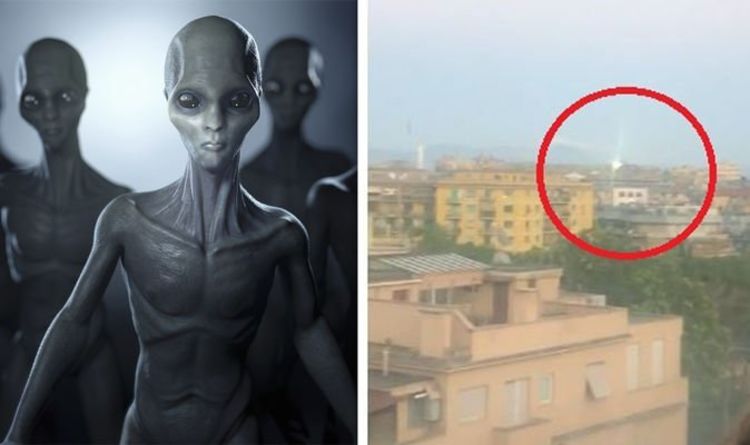 
An unknowing family was looking out of their window from their home in Rome when they spotted a bright light in the horizon. Suddenly, the light, which is yellowish and perfectly circular, shoots up towards the sky. The family is left baffled by the incident, with people in the background saying in Italian: “What are they?”

The person who films then adds: “Here it is, it’s going up. What’s this stuff? It’s gone.”

The video was picked up by several media outlets in Italy before conspiracy theorists got hold of it.

Several UFO hunters are convinced this is a sign of alien activity in Italy.

Popular YouTube channel UFOMania said: “A luminous sphere was spotted and recorded with a mobile phone by a family living in the area of ​​Villa Chigi in Rome.”

Many people who commented on UFOMania’s video were absolutely convinced that the sighting is extraterrestrial.

YouTuber EVA UFO commented: “It is a plasma drone. It’s got to be alien technology or something else, just understand that they are taking pictures of our landscape and maybe compared them to the old times.”

One person, COVER UFO MAGAZINE, believes the sighting could have been an alien abduction.

They commented: “Did we just witness an alien abduction? This is exactly how the several spheres we saw over a busy interstate outside Albany NY took off. This looks real to me.”

However, others were not so convinced by the video’s authenticity, and believe the sighting could have been of something which has a more logical explanation.

YouTuber Stuart Walker questioned whether the video was a complete fake.

He wrote: “They find something so interesting they need to film it and zoom in but then they just get a little fed up and stop. Anybody who has been to Rome or checked on maps will know how heavily populated it is and everybody would have seen it.”

A Splash of Milk in Coffee May Have Health Benefits We Didn’t Know About : ScienceAlert
What Can They Actually See? : ScienceAlert
Bar Graphs Induce a Hidden Bias in Interpretation, Experiment Shows : ScienceAlert
Scientists Discover a Weird New Form of Ice That May Change How We Think About Water : ScienceAlert
How a Dead Girl in Paris Wound Up With The Most-Kissed Lips in All of History : ScienceAlert