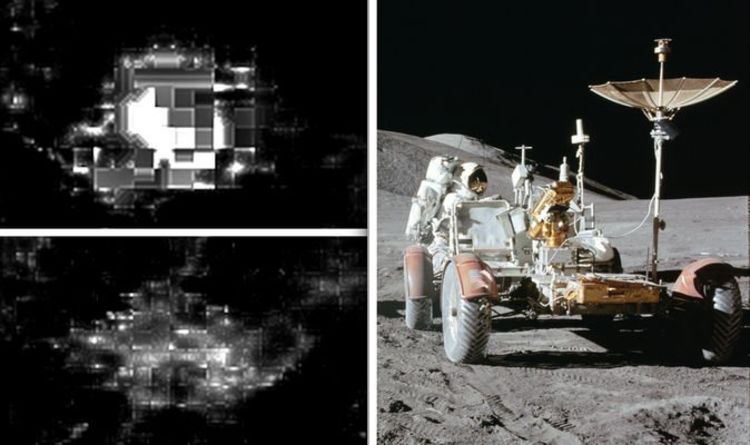 
The sensational UFO claim was made by prominent ufologist Scott C Waring, who runs the blog UFO Sightings Daily. The alien discovery, Mr Waring touted, has the potential to convert even the hardest of UFO-deniers. In a bizarre post on his website, the UFO expert shared images of what he claims are square-shaped and modular alien structures on the Moon. The images were all taken by NASA’s Apollo 15 mission, which was the ninth lunar expedition to land on the Moon in 1971.

Mr Waring said: “It might be overwhelming to suddenly go from believing to knowing.

“I do not mean to frighten anyone but only to bring the truth to light.

“I actually found this several weeks ago but hesitated till now to publish it. I was worried some people may panic.

“The biggest fear is not aliens attacking Earth, it’s that they exist when science says they should not.

“It causes the person to call into question everything they ever learned in school, church, TV, from friends and how aliens must have already influenced the direction humanity is currently travelling without anyone ever knowing.”

Mr Waring even accused NASA of doctoring the lunar photos in a bid to conceal the presence of alien buildings on the Moon.

Explaining his discovery, the conspiracy enthusiast said he had to process the photos to bring out their hidden detail.

The process, he claimed, revealed the original photos just as they were taken nearly 50 years ago.

Mr Waring said: “You need to do this because NASA added too much light to the photos on purpose in order to cause many of the areas of the photos to appear as white-grey and unclear.

“Thus bringing it back into the proper light and focus creates the original photo as it was first taken.

“You will notice that the aliens built the structures as square partitions.

“Much like remaking a house and moving the parts to the locations to create it.

“This may be proof that the structures were created somewhere else, then brought to the Moon to put together.”

The UFO expert then said it takes a “deep plunge” to accept the reality of alien existence “but it must be taken”.

He said: “That’s why I never say I believe in aliens. It sounds like I have doubt but I don’t. I know they exist.”

But did NASA really take photos of alien bases on the Moon or is there something completely different going on?

The most likely scenario is Mr Waring fell for the psychological effect of the mind known as pareidolia.

Pareidolia is a bizarre mind trick, which causes people to see faces, shapes and UFOs in clouds, shadows and rock formations.

Scientists Show How to Calculate Your Dog’s ‘Human’ Age, And It’s Not a Multiple of 7
Gigantic Sea Scorpions, Some Larger Than Humans, Hunted in Ancient Oceans
Astronomers Reveal Glorious Catalog of Objects That Could Host Alien Intelligence
Giant Whale Sharks Have Hundreds of Tiny Teeth-Like Structures Around Their Eyes
Deadly Lightning Strikes in India Kill 147 in 10 Days, And Are Predicted to Get Worse