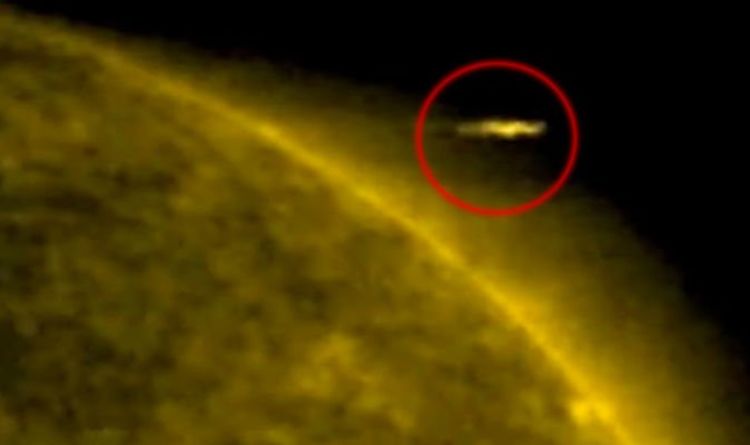 
NASA has been studying the Sun with its orbiting space observatory for more than 20 years. SOHO is in particular studying violent solar storms capable of causing trillions of dollars in damage to Earth’s infrastructure. But now self-proclaimed alien life hunter Scott Waring has claimed the NASA craft has made its most important find yet – spotting a giant disk-shaped UFO shoot out of the Sun.

Waring took to his etdatabase.com blog to outline his outlandish interpretation.

He said: “I have found what appears to be an UFO coming out of the right-hand side of our Sun.

“And once the footage is magnified, it appears to show a disk shooting straight out of our Sun.

“You would think that if something came out of the Sun, it would not be shooting from the top out, rather from a diagonal direction – it has 45 degree more tilt then other ejecta.

“This is because that is the way gravitation acts around the Sun, so I don’t believe it is magma by the trajectory it is taking.”

Waring then zooms in the top right-hand corner of the NASA screen shot, allowing viewers to watch a faint trail as the object exits the star.

And photo editing software is then used to brighten the supposed spacecraft trails.

The size of Earth is next shown to be smaller than around a fifth of the bizarre ejecta.

Waring continued by speculating whether the revered US space agency is responsible for covering-up the existence of aline life.

He said: “This is really huge. For NASA not to discuss magma of this size shooting out of the Sun is unprecedented.

“NASA are not doing their job if they are not telling us about things flying out the Sun, because if this is just magma it is more than enough to wipe out Earth.

“I have long believed the Sun is hollow and holds its own mini solar system inside of it, harnessing the energy of the star to power these alien worlds.

“And this UFO is proof the theory is correct.”

Paula Alexander write: “Crazy, maybe the craft getting energy from the sun.

“Scary how big it is. I can’t Imagine what it would look like hovering above earth, it would block out the sun and moon for sure. Great find.”

However not all the viewers were as convinced by the bizarre theory.

YouTube user Summer Brooks wrote: “No! Scott, there is not a fractal universe inside our sun.“