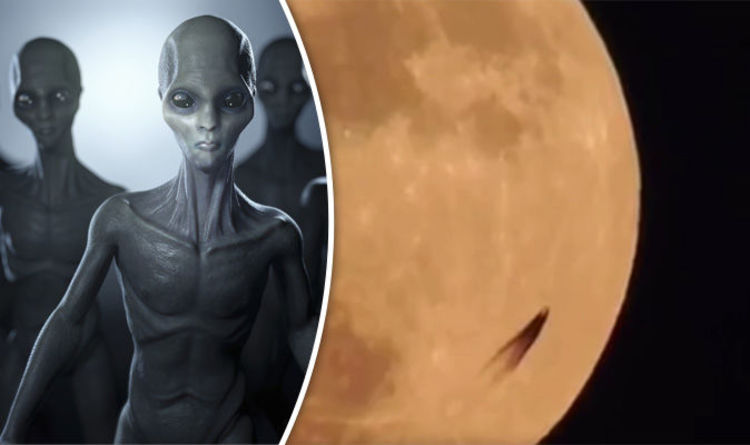 
Alien enthusiasts look to the sky every night in the hope of spotting UFOs – and one individual believes he has hit the jackpot.

Jason Callum, from Berkshire, was recording close-up videos of the moon on September 25 when he noticed something very peculiar.

During a clip which Mr Callum uploaded to YouTube, a strange saucer shoots across the face of the moon.

The video was soon went viral across the web, with many giving their opinions on what it could be.

One person wrote: “In my opinion, its not a satellite, too big if I assume relative distances.

“Its not within the earths atmosphere as would appear to move across the field of view more rapidly and likely be a blur.

“Your focus is on the moon and the object remains in focus. It must also be large!”

“We are being watched and don’t know how long the government is hiding this from the public.”

However, others believed their was a more natural explanation, with many claiming that it looks like a large rock orbiting the moon or travelling through space.

One person asked: “Could be an asteroid?”

Which prompted the response: “Looks like a rock, the colour dark and it didn’t turn or change speed.”

Many people believe that there is an alien race living on the moon.

Just last month, conspiracy theorists were sent into a frenzy when a massive structure was spotted on the moon.

Many jumped to the conclusion that it was an alien base or monument, and believe the likes of NASA are covering something up.

In a video uploaded to YouTube by Argentinian Marcelo Irazusta, the man-made-looking structure seems to be an anomaly on the surface on the moon.

A description from Mr Irazusta alongside the video reads: “A strange elevation of hundreds of meters in the middle of a plain of the Moon is a mystery that must be revealed.

“Everything seems to indicate that it could be a non-natural structure. It is really awesome.”