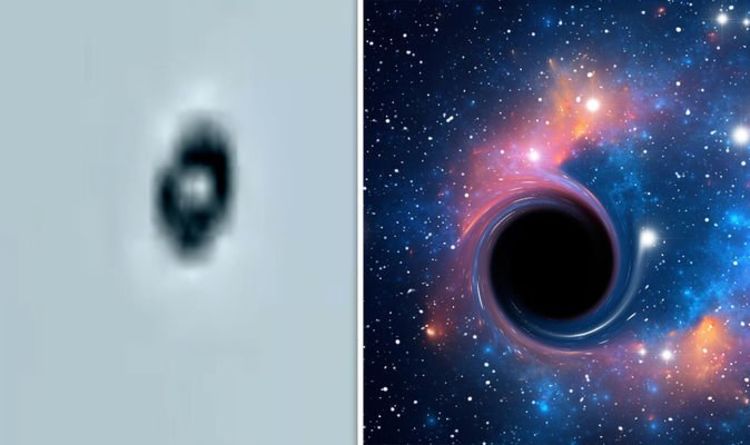 
A construction worker was on site in Buenos Aires, the capital of Argentina, when he and his crew spotted a strange black object overhead. The worker was quick to grab his mobile phone and begin filming the circular object above. Prominent conspiracy theorist Scott C Waring believes the sighting is proof of alien visitors, and the fact the man apparently looked straight at it is evidence that extraterrestrials have an “aura” about them.

Mr Waring wrote on his blog ET Database: “The man said he was working on a foundation of building when he and his co-workers saw this black ring object flying over head.

“Had this been a balloon it would be flipping like a wheel end over end. This one seems to stay flat, unlike any balloon I have ever seen.

“Often when a UFO is nearby, people and animals sense its presence. I mean often they have an emotional aura that either pushes a person to look up and see it, or even make you relax almost in a trance meditative state.

“You have to seen one first had and feel it to know what I’m saying. Not all UFOs have this aura, but many do.”

Argentina is something of a hotspot for UFO sightings, so much so that a UFO ‘landing pad’ was built in the wilderness of Argentina by a man who claims aliens told him to create the site.

Deep-Sea Sponges Can ‘sneeze’ Out Mucus, and The Footage Is Weirdly Mesmerizing : ScienceAlert
Clinical Trial Restored Sight to 20 People With Corneas Made From An Unlikely Source : ScienceAlert
An Experimental Surgical Robot Is Headed to The International Space Station
New Predictions Reveal The Fate of The World’s Biggest Ice Sheet if We Don’t Act : ScienceAlert
This Artificial Synapse Can Run a Million Times Faster Than Ones in The Human Brain : ScienceAlert