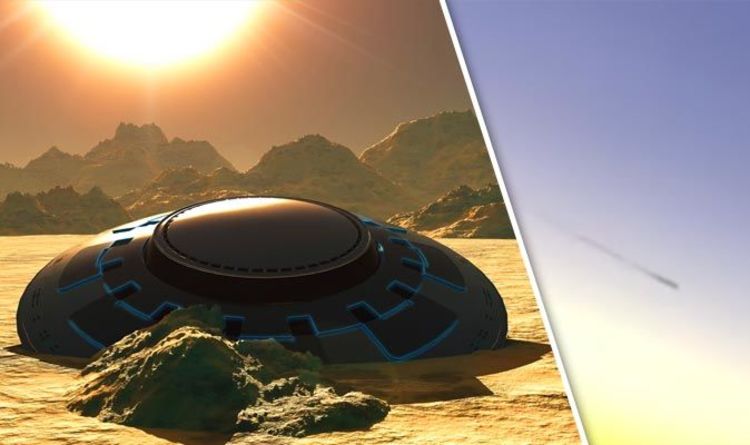 
The UFO was seen by a person who gives their name as just their YouTube handle ‘kannywhat’ and who was on a flight to Paris.

As he looked out of the window to view the sunset over France, the YouTuber spotted a strange oblong object hovering in the distance.

The black UFO is on an odd trajectory, wobbling slightly as it flies and emits black contrails in its wake.

This has led some to believe that it is in the process of breaking down.

The video was quickly picked up by popular conspiracy theory YouTube channel Third Phase of the Moon.

The narrator of the video said: “Some people are speculating that this is some kind of UFO in a crash landing situation.

“The object itself seems a little wobbly, in its own way it seems like a tadpole. This thing is unstable, it is not moving on a steady trajectory.

“We see contrails all the time, but with colours like this they stand out like a sore thumb.

“Whatever was captured on camera is unexplained at this moment.”

Kannywhat added: “Before I recorded it, it was rapidly moving around. Strange!”

Many other people who commented on Third Phase of the Moon’s video also claimed to have experienced similar sightings.

Caligirl wrote: “I live in California and have seen a similar UFO.”

Dane 69 commented: “I just came home from a flight from Greece, and I did see many jets with this black exhaust, I was also wondering why they are black.”

However, there are no reports of a crashed spaceship in the area others offered more logical explanations.

Even the narrator of Third Phase of the Moon questioned: “Could it be a satellite falling into Earth’s atmosphere and burning up?”

While Oliver Cook claimed: “Its just a very dirty jet. Many Russian planes are like this – they look like they are burning coal.