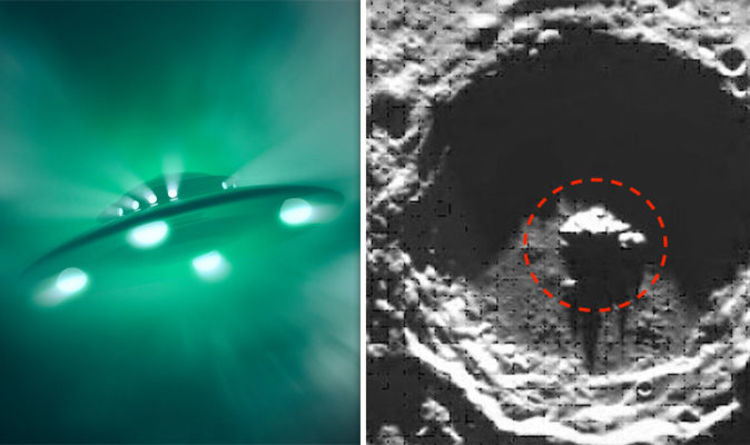 
The massive artefact was found in the Plaskett crater – a large impact zone on the moon witch is 109 kilometres in diameter. Conspiracy theorists located the supposed UFO using satellite imagery from the European Space Agency (ESA). The sighting adds to a growing list of alien-looking objects which have been found on our lunar satellite.

UFO researcher Scott C Waring was the first to discover the potential alien spaceship, raising the theory that it looks as if it was abandoned by extraterrestrials.

He wrote on his blog UFO Sightings Daily: “I found a large triangle UFO that was sitting in the centre of a crater on the moon. The UFO is dead centre in Plaskett crater.

“ESA says that crater is 109km in diameter. That would mean this UFO is 25+ miles across!

“The shape and size would be fitting for a craft that travels across the universe. Sitting in the centre of the crater makes me wonder if its been abandoned due to being outdated?

“Often I find ships in craters, however they are usually parked close to the inner edges so that they have some shelter to protect them.

“There is no intent or worry about have such protection here. I find that odd.”

Several other things have been spotted on the moon which has led some to believe there is an alien civilisation there.

They suspect findings such as this and anomalies like pyramids could be monuments built by an ancient alien civilisation similar to the pyramids and other structures on Earth.

However, sceptics and NASA say the findings are just the effects of pareidolia – a psychological phenomenon when the brain tricks the eyes into seeing familiar objects or shapes in patterns or textures such as a rock surface.