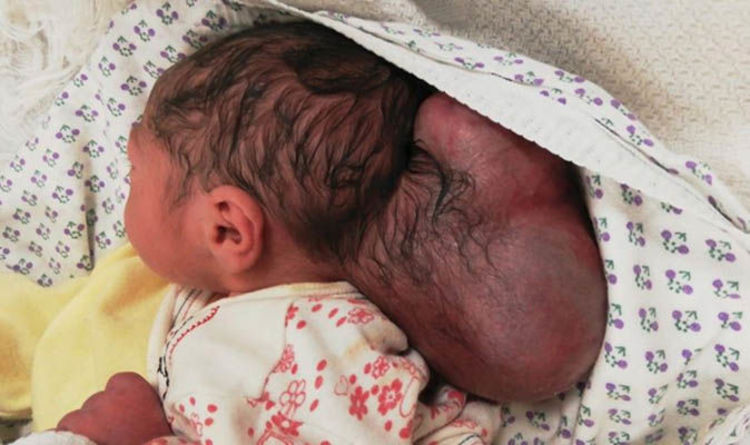 
It’s a rare condition that arises when a baby’s skull doesn’t close properly during pregnancy, and parts of the brain – or the membrane that covers it – form outside the skull in a ‘second head’.

Realising it was a risky birth, the 37-year-old decided to have her baby across the Turkish border in Hatay Province, at Mustafa Kemal University Hospital.

Facing death, the baby was then quickly transferred to Iskenderun Developmental Hospital where a brain, nerve and spinal surgery specialist removed the second head.

Dr Mehmet Koparan, who performed the surgery, said a case this severe would often have been fatal.

“In general, encephalocele (cranium bifidum) is seen in one in 5,000 live births,” he said.

“Grades three and four are less common, and often deadly. This case is grade three.”

Surgery on three-day-old Abdullatif lasted three hours and was fraught with difficulty.

“Of course it was complicated because of the brain tissue,” said Dr Koparan.

“A wrong surgical intervention could cause the patient to die of respiratory failure and hydrocephalus, which is a collecting of fluid in his brain.”

Following surgery the baby was placed in intensive care and, after eight hours of monitoring, was allowed to breathe on his own.

The second head weighed in at almost 1kg, comprising approximately a third of the baby’s total weight.

Dr Koparan said the baby has now been discharged and he expects him to enjoy a normal life.

The surgeon added that cases of cranium bifidum are most likely caused by the mother’s age and malnutrition.

In Europe and north America, cranium bifidum is likelier to occur at the back of the head, while in southeast Asia, Africa, Malaysia, and Russia, the front of the head is more common.

It Turns Out There Is Such a Thing as Good Gossip, According to New Research : ScienceAlert
These Are The Most Distant Star Clusters Ever Seen, And We Nearly Missed Them : ScienceAlert
New Discovery Means Parkinson’s Could Be Diagnosed With a Swab in Just 3 Minutes : ScienceAlert
Secret Clues in Tutankhamun’s Tomb Reignite The Idea That Nefertiti Is Hidden Nearby : ScienceAlert
Astronomers Think They Know The Reason For Uranus’s Kooky Off-Kilter Axis : ScienceAlert