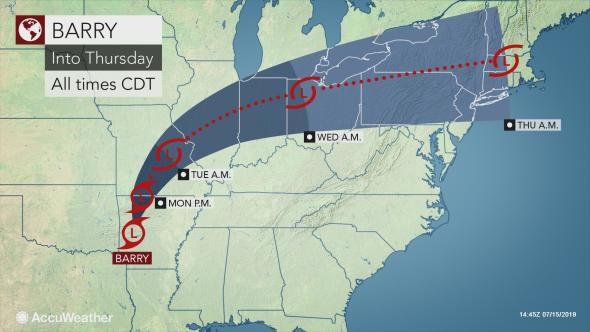 
While the lower Mississippi Valley is bearing the brunt of Barry…

Heavy downpours will spread across the mid-Mississippi and Ohio valleys into Wednesday with localized flood dangers.

After Barry made landfall as a Category 1 hurricane at midday Saturday, the storm has significantly lost wind intensity.

Barry weakened to a tropical depression Sunday afternoon and is expected to become a tropical rainstorm on Monday as its bands of rain and thunderstorms expand farther to the north into the mid-Mississippi and lower Ohio valleys.

“The rain will target mainly the mid-Mississippi and lower Ohio valleys on Tuesday before moving into the upper Ohio Valley on Wednesday,” according to AccuWeather Meteorologist Max Vido. “The primary threat to these regions will be heavy tropical downpours.“

There is likely to be more consolidated areas of heavy rain spreading into western Tennessee, southeastern Missouri and southern Illinois early in the week. In comparison, rain and thunderstorms may be more showery in nature as Barry tracks eastward Tuesday into Wednesday.

That should result in rainfall totals diminishing from 3-6 inches around southeastern Missouri and western Tennessee to 1-2 inches across eastern Kentucky, Ohio, West Virginia and western Pennsylvania.

Residents and motorists planning to travel through the Ohio Valley will still want to remain alert for flash flooding, as well as travel hazards. An isolated tornado cannot be ruled out.

A quick 1-2 inches of rain can cause low-lying, poor drainage and urban areas to flood. Small streams may rapidly rise out of their banks for a few hours.

“The Ohio River and most of its major tributaries are not running high and can handle the amount of rain expected from Barry,” according to AccuWeather Senior Meteorologist Alex Sosnowski.

“However, we remain concerned about significant small stream and urban flooding along Barry’s path,” Sosnowski said.

Downpours can dramatically reduce visibility for a time on stretches of interstates 55, 64, 69, 70, 71, 75 and 77. Motorists may also face a heightened risk of vehicles hydroplaning when traveling at highway speeds.

While flooding incidents will be localized, many more outdoor plans will be in jeopardy from St. Louis to Indianapolis; Louisville and Lexington, Kentucky; Cincinnati and Columbus, Ohio; Charleston, West Virginia; and Pittsburgh.

Anyone outside is reminded to seek shelter as soon as thunder is heard to avoid being struck by lightning.

“Parts of the Corn Belt, particularly far western Illinois and Iowa, will miss out on Barry’s rain,” Vido added. “These areas will stay very hot and mostly dry through the week.“

As Barry shifts eastward and helps to fuel downpours across the Northeast and mid-Atlantic, the door will open for sweltering heat and humidity to surge across the Ohio Valley later this week.

The week may end with widespread highs in the 90s, soaring between 95-105 F during the midday and afternoon hours.

Be careful about clusters of severe thunderstorms that will erupt along the northern rim of the late-week heat and threaten parts of the Midwest.