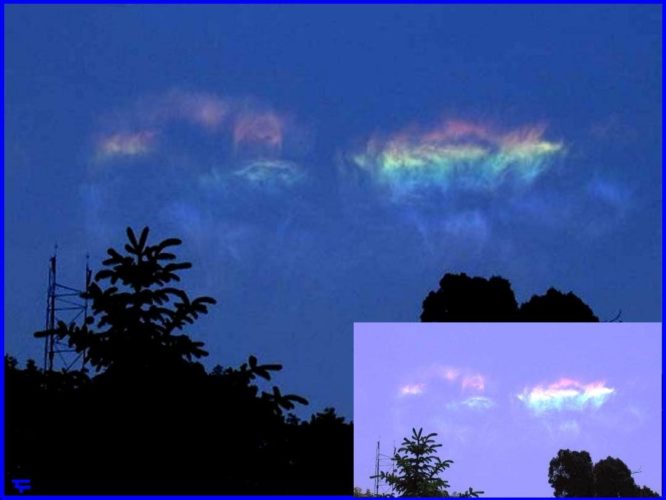 
There is no proven way to predict an earthquake. But does nature warn when a big earthquake is coming? Do animals hear this warning when we don’t?

Here 5 earthquake warning signs that may occur before a strong earthquake.

Days, or even seconds before an earthquake, people have reportes seeing strange lights rising from the ground or hovering in the air. Though they are not fully understood, earthquake lights may be emitted from rocks that are under extreme stress.

Skyquakes or mysterious booming noises are typical earthquake precursors. They may occur several day before a large quake. The cannon-like rumbling or a sonic boom phenomenon coming from the sky have been heard in several locations around the world but remains unexplained. Many however have reported hearing loud booms prior or during earthquakes.

3. Strange Multicolor Clouds in the Sky

Earthquake clouds are claimed to be signs of imminent earthquakes and have been described since antiquity. Some of these extraordinary clouds may even occur a week before the earthquake.

Rainbow clouds are often reported before quakes as featured in this video 20 minutes before the Sichuan earthquake:

Although scientists claim to have observed clouds associated with a seismic event, these claims have very little support in the scientific community.

There are reports of animals, from toad to bees to birds and bears, abandoning their homes or breeding grounds just before an earthquake.

It is not understood why animals may sense an oncoming event, possibly because of changes in the electric field or feeling smaller tremors that humans can’t sense, but noticing strange behavior in your pet may give you a heads up that something is about to happen:

Yep, look at this amazing dog:

And underwater creatures such as oarfish and whales may be a sign of an incoming quakes.

The most typical electronic precursor are unusual and sometimes unique TV interference the night before the quake.

If you experience one or more small earthquakes, there may be another, bigger earthquake on the way. However, foreshocks may not always occur before an strong earthquake, and it is impossible to tell which earthquake is the main quake until waiting for the largest quake of the series.

So Is It Possible to Predict Earthquakes?

It’s sad to say, but there is no general earthquake precursor. Geologists are working on early warning systems, but there is still much to be learned about what happens just before an earthquake hits since earthquakes don’t always behave in a consistent way. Some signs occur at different times (days, weeks, or seconds before the event), whereas sometimes those signs do not occur at all.

The most spectacular success was HaiCheng, China 1975. Scientists used several converging lines of evidence to persuade authorities to evacuate the entire city. The next day a disastrous earthquake struck which would have killed tens of thousands. One year later, officials evecuated the town of TangShan, using the exact same warning signs, but this time, no earthquake struck.