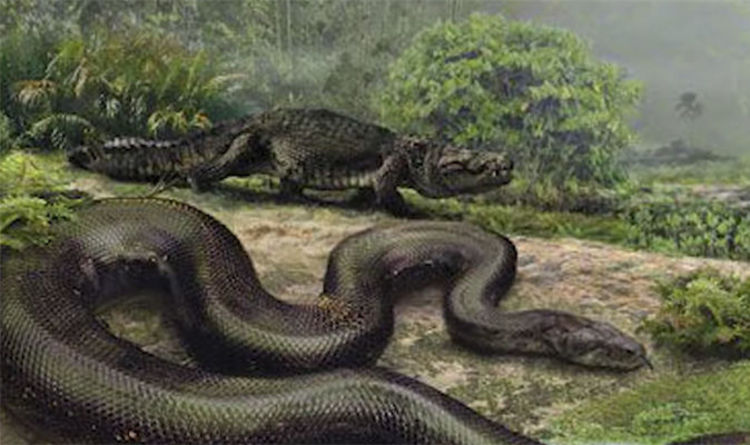 
The Titanoboa was a monstrous snake which could grow up to 42ft long and weigh 1,135kilograms – more than a ton.

The beast is believed to have lived 58 to 60million years ago, shortly after the dinosaurs went extinct.

However, some believe the Titanoboa still exists in parts of the Amazon.

The Amazon, thanks to its massive size of 2.5million square miles and constant flash flooding, is one of the few places on Earth which has yet to be fully explored.

There are many species inside the rainforest which have yet to be discovered, according to biologists, and the Titanoboa could be one of them.

Some tribes in the Amazon believe the Titanboa still roams, especially in the waters.

Website Mysterious Earth says locals speak of a giant snake measuring up to 40ft long which they call Yacumana – or Mother of the Water.

The website states: “As over the top as it might seem, the South American continent is home to legends of even larger snakes.

“The Amazon’s murky waters could, in theory, offer Titanoboas the cover to reach over 150 feet in length.

“No official sightings exist but those who’ve seen it swear on their lives that the animal is real.

“The longest recorded Anaconda measured roughly 25ft in length bu that doesn’t even come close to the Yacumana’s reported size.

“If rumours of the Yacumana are true, this serpent could be an undiscovered species of Anaconda or even a surviving Titanboa.

“Either way, it does not look like it enjoys much publicity so we might never get to see one.”

Giant Asteroid Unleashed a Devastating Martian Megatsunami, Evidence Suggests : ScienceAlert
A ‘Wormhole’ Built on a Quantum Computer Teleported Information as Predicted : ScienceAlert
It Sounds Crazy, But Walking Backwards Is Really, Really Good For You : ScienceAlert
Psychologists Found a Weird Trick That Changes How Food Tastes : ScienceAlert
Some People May Make Extreme Snap Judgements About You Thanks to Face-ism : ScienceAlert