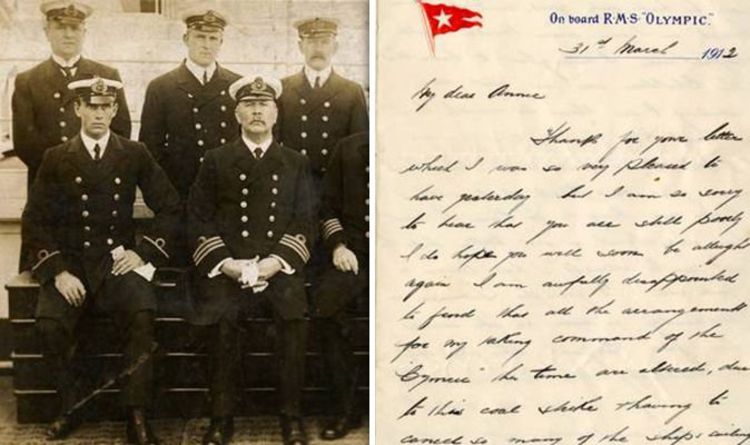 
The British passenger liner famously sank on April 15, 1912, after striking a huge iceberg, sending more than 1,500 passengers and crew to their deaths.  The huge vessel was on a journey from Southampton to New York when disaster unfolded but now, 100 years on, some still refuse to believe the official story of how the Olympic-class liner sunk. Among the popular conspiracies are that the ship was sunk as part of an insurance scam and, although such stories may be far from the truth, there are some bizarre but confirmed tales to emerge from the tragedy.

Henry Wilde, who was the second in command to Captain Edward Smith on board sent a letter to his sister on March 31, 1912, it was revealed in Amazon Prime’s “Titanic Arrogance” documentary.

In the document, he revealed his concerns for Titanic.

He said “I still don’t like this ship… I have a queer feeling about it.”

It was the last message his family would ever receive from him after he failed to make it out among the 705 survivors.

Wilde was hailed for his actions during the sinking, however.

After the collision with the iceberg, he spoke with bosun Albert Haines lamp trimmer Samuel Hemmings about the extent of the damage.

He then joined Captain Smith to report their findings.

He made sure weight was spread evenly and oversaw them being loaded and lowered into the water.

Auctioneer Andrew Aldridge revealed: “This is without a doubt one of the finest Titanic-related letters, written by one of the liner’s most senior officers on Olympic stationery.

“It reveals previously unknown details and shows Wilde’s obvious disappointment in being transferred to Titanic.

“Wilde is mentioned in survivor recollections of the sinking, but his activities remain something of a mystery.

“What is certain is that he worked diligently to load the boats once the seriousness of the situation was clear to him.”

‘Baby Brain’ Is Real, Scientists Confirm, And We May Finally Know Why : ScienceAlert
Expert Proposes a Method For Telling if We All Live in a Computer Program : ScienceAlert
1st Detailed Study of ‘Misokinesia’ Phenomenon Shows It Might Affect 1 in 3 People : ScienceAlert
The Cause of Alzheimer’s Could Be Coming From Inside Your Mouth : ScienceAlert
Octopus Brains Evolved to Share a Surprising Trait in With Our Brains : ScienceAlert