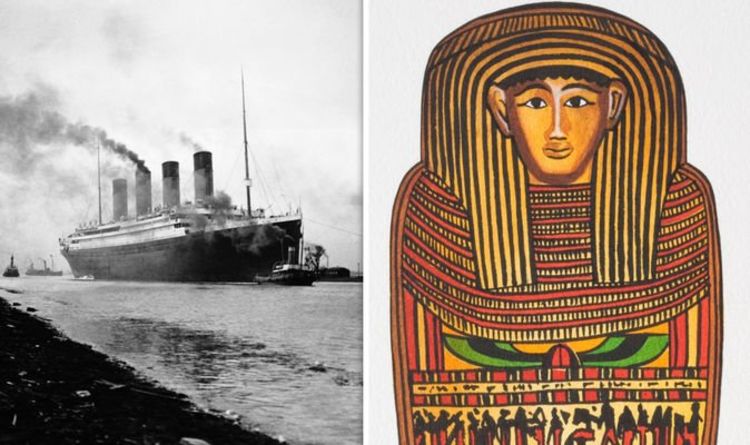 
Titanic famously sank 107 years ago today during its maiden voyage from Southampton to New York City, US. The British passenger liner, under the captain of Edward Smith, had roughly 2,200 passengers on board when it collided with an iceberg shortly before midnight – an accident which saw more than 1,500 people lose their lives. However, according to one survivor, the tragedy was not an accident.

The Unlucky Mummy is an ancient Egyptian Artefact which is a painted wooden coffin lid believed to date back to the 22nd Dynasty.

In the 1900s, journalist Bertram Fletcher Robinson spent months investigating claims that the monument was cursed.

However, before he could publish his work, he mysteriously died.

Sir Arthur Conan Doyle thought it was a strange coincidence, as did some of Mr Robinson’s other acquaintances.

Mr Doyle said of Robinson’s death: “It was caused by Egyptian ‘elementals’ guarding a female mummy, because Mr Robinson had begun an investigation of the stories of the mummy’s malevolence.

“The immediate cause of death was typhoid fever, but that is the way in which the elementals guarding the mummy might act.”

As rumours spread about the mummy’s apparent curse, more journalists became fascinated by the story, including William Stead, who unfortunately lost his life on board the Titanic.

Mr Stead, who travelled first-class on the passenger liner, had been invited personally on board by President Taff.

His investigative journalism work by that point had been so well-recognised that he was even a candidate for collecting a Nobel Prize for Peace later that same year.

However, following his death, an anonymous testimony was made by one of the survivors to the New York World.

The claims said Mr Stead had told passengers the Unlucky Mummy was on board the lavish ship and was to blame for the tragedy.

However, it was later revealed the artefact was actually found intact in the British Museum, suggesting it had never left.

There was no record of the Unlucky Mummy being among the ship’s cargo and no other passengers recalled seeing it during the evacuation.

It was previously claimed by an expert that Titanic did not actually strike an iceberg.

Captain L. M. Collins released a book in 2002 titled “The Sinking of the Titanic, An Ice Pilot’s Perspective,” where he proposed three reasons why he believed Titanic actually hit pack ice.

Following the release of the book, he said: “I am convinced beyond everything that it was impossible to hit an iceberg.

“Instead, the Titanic transited a strip of Arctic pack ice.

“There is no credible evidence that Titanic hit or was in contact with an iceberg.”