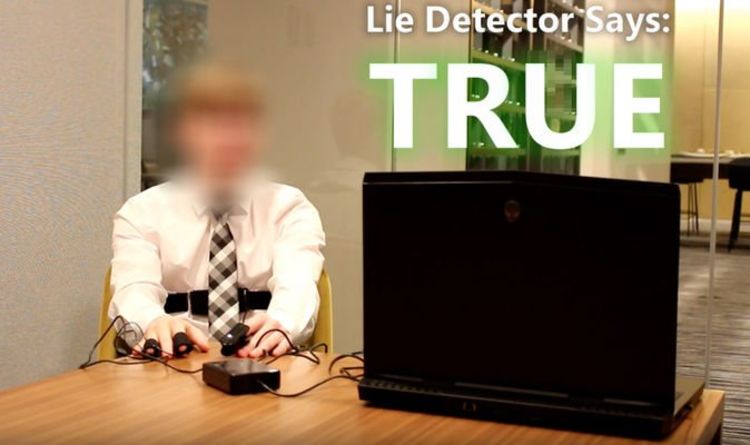 
The bizarre video uploaded to YouTube shows paranormal investigators hook up a supposed time traveller to a lie detector machine. The time traveller, who goes by the name of Adam Archon, claims to be the from the not-too-distant year of 2045. The mysterious man obscured behind a blurred face, says he agreed to a lie detector test in a bid to back up his doubtful story. In the video, the time traveller is connected up to an Alienware laptop and some wiring, without an actual polygraph machine in sight.

He then proceeds to answer questions about himself and about the future, all of which flash “TRUE” in a text overlay on the video.

Mr Archon says in the unusual clip: “I need to prove to you that this is true so that you can take the information that I am giving you and make the world a better place.”

The time traveller then rattles through a series of questions about an implanted chip in his hand, aliens visiting Earth in the year 2028 and the future reveal of time travel.

He says: “Yes it is true that aliens did land on Earth in August 2028.

“In fact, we have known of the existence of aliens before 2028 but it isn’t until 2028 that it becomes public knowledge.

And on the question of time travel he says: “Yes, it is true that time travel was released to the public in 2028 but it was invented in 1981.

“It was just kept secret until they released it publicly.”

Mr Archon then appears to confirm the name of the last United States President, a bold claim previously made by the equally mysterious time traveller Noah Novak.

The time traveller also said aliens will not come to Earth from space but could not elaborate on any details.

He also shockingly announced in 2030 all of the world’s countries merge under the flag of a single global superstate.

And by the year 2045, the world will be governed by a super advanced form of artificial intelligence, with only 10 people monitoring over it.

Mr Archon said: ”Yes, there is an AI that is released to all of the world, known as The Light.

“It is put into every single device and you can ask it anything you want and it will give it an answer to the best of its ability.”

But despite these incredibly wild claims, not everyone who saw the time traveller’s examination was convinced by his story.

One YouTube viewer, Bobby Morton, said: “Don’t see anyone giving him the actual lie detector so this has zero credibility.”

Michael Robbins said: “If the guy is insane and believes his lies then the lie detector won’t detect that he’s lying.”

Texas Dhule asked: “Why you are not showing the laptop screen to us? That is, the actual application of lie detector test with its results?”

And Danny Walley said: “Pretty ironic every answer is yes. You must have some great questions man.

“Also what shows us that it says true, you typing it on the screen.”

The Locust Plague in East Africa Is Sending Us a Message, And It’s Not Good News
Giant Whale Sharks Have Hundreds of Tiny Teeth-Like Structures Around Their Eyes
Neptune Rains Diamonds, And Now We Might Finally Know How
There’s A Place On Earth Getting Cooler, Not Hotter. A New Study Sheds Light On Why
We May Finally Know The Extreme Route Fish Take Through Air to Colonise New Lakes