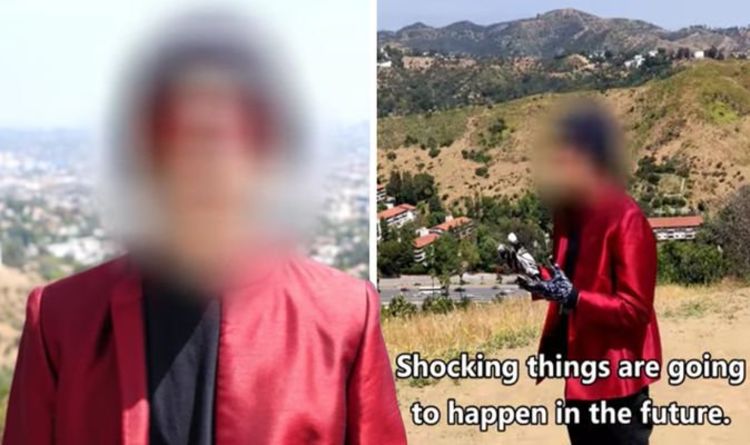 Speaking to YouTube channel ApexTV, the time traveller said: “Shocking things are going to happen in the future.

“I’m going to share with you one of the most shocking things that you will have ever heard before.

“You will be absolutely shocked at the information I’m going to give you.”

According to the doubtful time traveller’s testimony, time travel technology will be revealed to the public in the year 2028.

Then, in the same year, world governments will reveal to the public the existence of extraterrestrial aliens.

Kasper said: “These are shocking details that are going to happen in the future.

“So, in the future, I was sent back to the year of 2019 on the public mission to collect data about the past.

“And I came back to the past with video cameras, with photography equipment, 3D scanners, sonar equipment and all of this equipment that helps me map out the past.

“And we’re sent for specific missions. I am here in Los Angeles, California, to map out a specific thing that I cannot get into details of.”

Los Angeles will be the epicentre of a disastrous flood in just 43 years, according to Kasper.

The time traveller said: “I am in Los Angeles, California, because very shocking detail is going to happen in this city.

READ MORE: ‘Time traveller’ claims THIS country will rise as super power in 2030

“In Los Angeles, California, there is going to be a major flood. This happens around the year 2063.

“There is a major flood and Los Angeles, California, is underwater in the year 2063.”

However, many of the people who saw the time traveller’s confession tape were not convinced by his doomsday warnings.

One person commented on YouTube: “I feel bad for people that completely believe everything these ‘time travellers’ say.”

Time travel news: The man claims to be from the year 2075 (Image: APEXTV)

Another person, Orlando Rodriguez, said: “Give me bottom numbers and I’ll believe you.”

Richard Franco said: “Too much blah, blah just predict even just a little happening that is sooner.”

And user Chocolate Shogun said: “Guess it’s too much to ask for you to send back a scholar or something.

“They seem to just be handing out time travel day passes to anyone.”

This Early Human ‘Eden’ Was So Lush, Even Migratory Animals Didn’t Bother to Move
40 Years of Data Confirm Hurricanes Are Getting Stronger. Climate Models Were Right
Scientists Reveal a Proof-of-Concept Bionic Human Eye
Pain Experiment Shows There Really Is Something Soothing About Saying The ‘f’ Word
SpaceX Is About to Launch Two Astronauts Into Space in a Historic First