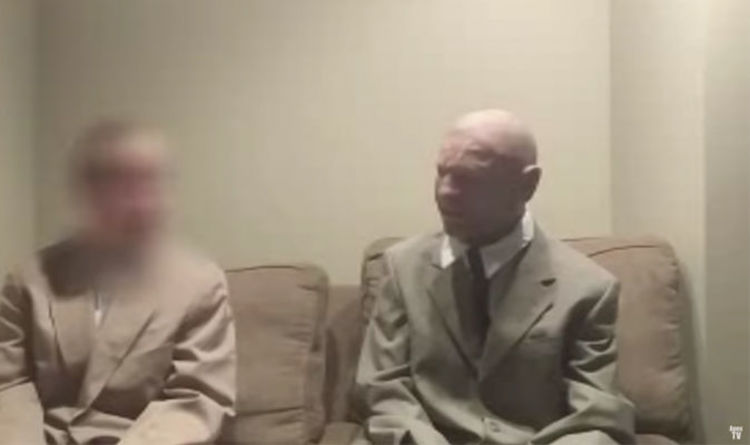 
In a bizarre video on youtube shared by Apex TV, the unnamed man says he was part of an experimental science project in 1982 which allowed him to time travel.

He said: “When I was a young man, I was part of an experiment in which I travelled to the year 2018 and I met my future self.”

The older 2018 man leads the video next to his blurred ‘younger self’, and says he is certain they are the same person.

He continued: “Meeting you has led me to conclude that we are leading the same life.

“You have lived the same life that I have.”

After meeting his 1980s self, the man weirdly concludes that humanity is existing on a constant cycle.

He said: “We are living in a loop.

“There is an infinite number of realities and we are simply going in a loop.

“It is one of the most remarkable things.”

The incredible meeting could alter the world’s timeline, the man says, but is worth the risk “to tell the truth”.

He said: “I do believe that we are changing the timeline by being here.

“We are exercising our free will to change the timeline by making this video.

“The reason that I came out with my story is that I needed to tell the truth.

“I feel as if the public needs to know.”

Despite the strange claims about “changing the timeline,” the time travelling man insists the meeting between the pair of them will not cause a “paradox”.

He added: “Would meeting my past self cause a paradox?

“I don’t believe it will.

“I remember being your age and meeting my future self.”

However, some people appeared unconvinced by the man’s claims.

One YouTube commenter said: “Are there other people here except me that don’t believe one bit this is even remotely real?

Another suggested that the video was simply an attention grab: “Oh the things people will do for attention.”

Psychologists Found a Weird Trick That Changes How Food Tastes : ScienceAlert
A Strange Thing Happens to Wolves Infected by Infamous Mind-Altering Parasite : ScienceAlert
Massive Global Study Shows Belief in Witchcraft Is More Abundant Than You Might Think : ScienceAlert
Lyme Disease Is on The Rise, But There Might Be Hope in a New Vaccine : ScienceAlert
These Mysterious Fungi Belong to an Entirely New Branch on The Tree of Life : ScienceAlert