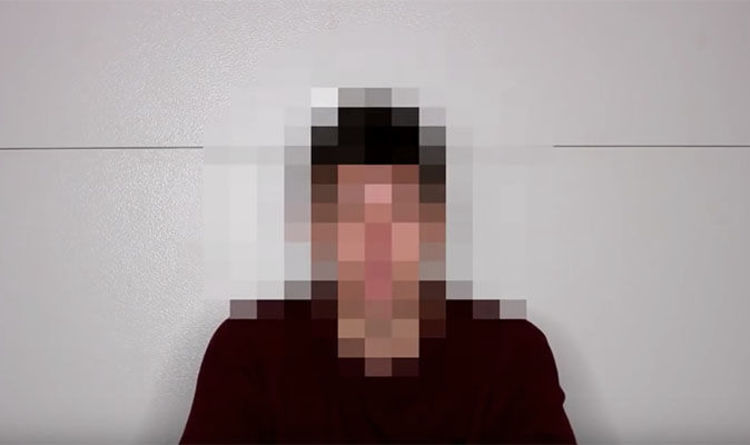 
Known only as Noah, he has had his face pixelated and his voice changed to hide his true identity as he spoke out on YouTube about how the US government picked him to travel to the future for eight years in a top secret mission.

The American said he was selected because of his superior intellect and his keen interest in history and was catapulted 12 years into the future so “the government could find out what the future is like”.

He said: “I was in a huge desert and there was a door – double doors actually – and I remember the man in front of me pushed them open and I saw a huge underground bunker.

“And that was the first time I saw a time machine.”

However, Noah gives no details of what the time machine looks like, in the bizarre video.

In a 37-minute video, Noah makes the outlandish claim he found himself in the Nevada desert where US military escorted him to a building with a door that, when opened, contained a time machine.

He said the mission began with a briefing before being “zapped” and waking up in a room with basic furniture.

Noah said: “A bulky man, pretty big, who looked like an army general started saying ‘Do you know why you’ve been selected?’ and then he started going ‘You guys have the best academic scores you guys have the best features. Each of you have something unique about you which we want’.”

Noah claims that being a history buff, he was told that would be his specialist subject when in the future, while five other people in his group were given other topics such as architecture and space.

He said a microchip was implanted under his skin by a doctor before the mission began.

He said: “They basically put it in my left wrist and I remember the doctor laying me down and saying this is going to hurt for a whole week.

“He said just be brave about it.”

Noah said after being “zapped” he woke in a room that had bunk beds and a wardrobe filled with basic clothes.

He said despite time travelling several different times, one of the only locations he remembered is going to South America on a mission to target Columbian drug lord Pablo Escobar before he died.

Though Noah did not reveal any further details of the mission.

Noah said in his group of five was “one female” which he found surprising because he had been under the impression the US government only wanted “straight, white guys” to time travel.

The ‘time traveller’ also said when he got back to the current year, he felt “drained” by the mission and “slept a lot”.

Noah claims he signed a contract with the government to travel through time for a total of eight years and that others had signed up for 50 years.

Noah’s video has had a whopping 9,021 views to date after being uploaded by ApexTV.

Comments on the footage praise Noah for coming forward with his extraordinary tale.

One commenter, who posted their opinion with the sunglasses emoji, said: “Absolutely cool! I really want to time travel.”

Another said: “Your videos are changing my life and the way I look at the future keep the videos up.”

Though some were quick to dismiss Noah’s story as fake.

One commenter said sarcastically: “Are woolly mammoths coming back from extinction?”

Noah follows a long list of others who claimed they too travelled through time.

One of the most infamous is Northern Irish filmmaker George Clarke, who uploaded bloopers of silent actor Charlie Chaplin’s film The Circus.

In the footage from 1928, a woman walks past at the film’s Los Angeles premiere.

She is seen holding an object up to hear which upon closer examination looks like a mobile phone.

Mr Clarke concluded the woman was a time traveller.

Weight Lifting in Old Age Does More Than Just Keep Your Muscles Strong : ScienceAlert
Biology Inspires a New Kind of Water-Based Circuit That Could Transform Computing : ScienceAlert
Secret Clues in Tutankhamun’s Tomb Reignite The Idea That Nefertiti Is Hidden Nearby : ScienceAlert
3 Major Aquatic Animal Groups Can Trace Their Lineage to This Ancient Armored ‘Worm’ : ScienceAlert
Amazing New Fossils Provide Earliest Known Traces of The Evolution of Our Jaws And Limbs : ScienceAlert