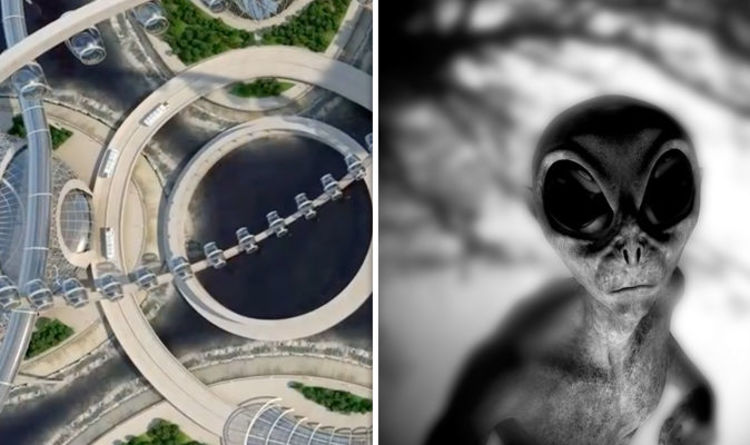 
In a bizarre online video, published on YouTube by ApexTV, undeclared former KGB agent Wojnach Djokovic, described his encounter with the strange creatures while working as a mechanical engineer for the Soviet Union in the 1980s.

Mr Djokovic said he fell asleep while in the time travelling machine, to then wake up in year 4000, “frozen” and in a “big, cold, swimming pool”.

He described the aliens as “white, white, they were absolutely white, with big eyes, about five or six feet tall with big heads and small tiny mouths with long fingers but without fingernails”.

Mr Djokovic then bizarrely claimed the creatures were friendly to him and forced him out the swimming pool to then start exploring his brain with a strange weapon.

During the procedure, one of the aliens revealed to the Russian engineer the origin of their colony.

According to Mr Djokovic, the alien told him: “We decided to move to the Earth planet.

“Our galaxy is great but we came here with an extremely important mission.

“We wanted to create a colony of the most intelligent people with super strong powers and abilities.”

The strange creature then allegedly said to the man they were surprised about humans living on Earth and they had a great plan to make “our” life more conductive.

However, the alien told him that for 50 years there were different wars between humans and them, as the humans did not want to accept them.

Mr Djokovic said: “They didn’t want to destroy people, they sent them to another planet.

“It was a great revolution.

“They began to create a unique planet and now it is their lace.

“It is a paradise, they were equal, they didn’t destroy buildings, birds or animals.”

According to the “time traveler”, the alien then told him to go back to his time and “inform the people about us”.

The alien allegedly said: “Tell them to protect your own place, but don’t try to return again.

“In other case I myself will kill you “

Some people on social media showed enthusiasm for the story whilst others claimed that “he was fake”.

One said: “Faker, just like the rest of them!

“However it is entertainment.”

Deep Brain Simulation Could Alleviate OCD When Other Treatments Have Failed : ScienceAlert
Experts Estimate The Scale of The Nord Stream Pipelines Methane Leak : ScienceAlert
We Just Got Our Closest View of Europa in 20 Years, And We Can’t Stop Staring : ScienceAlert
Wolves Really Can Become Attached to Humans Like Dogs Can, Adorable Study Finds : ScienceAlert
These Are The Most Distant Star Clusters Ever Seen, And We Nearly Missed Them : ScienceAlert