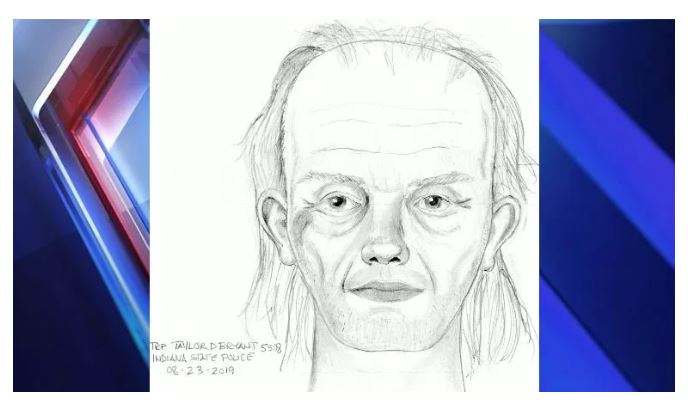 
The Monroe County Sheriff’s Office has released a composite sketch of the suspect in a rape reported on Tuesday.

And it is totally creepy… Psycho!

The sheriff’s office says the sketch was completed Friday afternoon with the assistance of the Indiana State Police. Officers say it’s not necessarily an exact illustration of the suspect, but it may be possible to recognize certain features in the illustration that might match someone you know.

The victim told detectives the suspect has a birthmark near his right eye and he’s described as being 5 feet 5 inches to 5 feet 8 inches tall, with a thin build. He is said to have blonde or light brown hair that is shoulder length on the sides and back, but it’s thinning or bald on top. The survivor described the suspect’s age as possibly being in his mid-40s.

The victim, an 18-year-old woman, told officers she was headed to a friend’s house when her car broke down near the intersection of Tapp Road and Rayle Place between 3:30 a.m. and 4:15 a.m. and her phone died. A man then stopped and offered to put gas in her car.

“After filling up the tank as she was walking back to her car he came up behind her and restrained her, pulled her back to his car,” said Detective Nathan Peach.