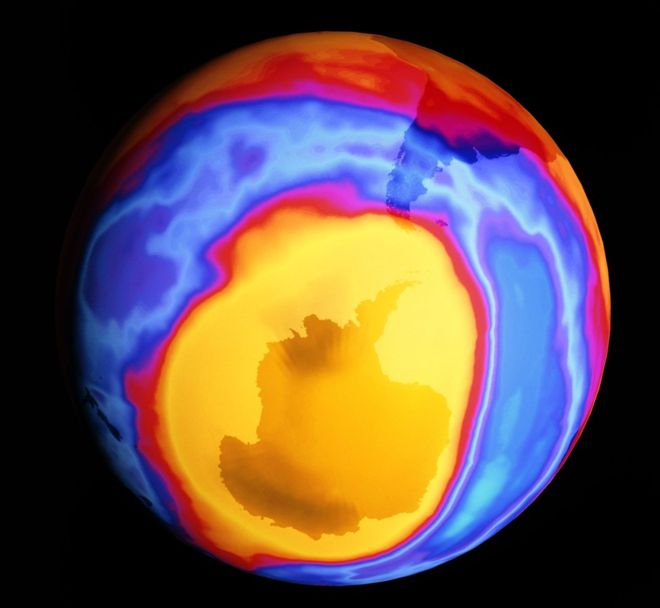 
The ozone layer, which protects us from ultraviolet light, looks to be successfully healing after gaping holes were discovered in the 1980s.

The Northern Hemisphere could be fully fixed by the 2030s and Antarctica by the 2060s.

A relatively new United Nations report says it’s an example of what global agreements can achieve.

The ozone layer had been damaged by man-made chemicals called chlorofluorocarbons (CFCs).

What does the ozone layer do?

The ozone layer starts about six miles above Earth.

It is a colourless form of a specific type of oxygen molecule that protects Earth from ultraviolet rays that can cause skin cancer, eye problems and crop damage.

How was it being damaged by humans?

The chlorofluorocarbons (CFCs) effectively began eating away at the ozone.

As a result, in 1985 a gaping hole in the ozone over the South Pole was discovered.

How bad did it get?

At its worst in the late 1990s, about 10% of the upper ozone layer was depleted.

But since 2000, it has begun to increase again by about 3% per decade, according to the UN report.

How did things turn around?

An international agreement called the Montreal Protocol made sure that businesses came up with replacements for these damaging products. 180 countries signed up to it.

In signing the protocol, those countries agreed to phase out chemicals like CFCs.

So it’s all better now?

It’s not a complete success yet, according to the University of Colorado’s Brian Toon, who was not part of the report.

“We are only at a point where recovery may have started,” he said, pointing to some areas of the ozone that haven’t repaired.

There are also concerns that increasing emissions of some chlorine-containing chemicals could still slow down the progress made in healing the ozone layer. These are normally made in China to go in to paint stripping products and to create PVC and they are unregulated.

But many experts are seeing it as a major step forward.

This is very intereting stuff, that I am glad to hear!