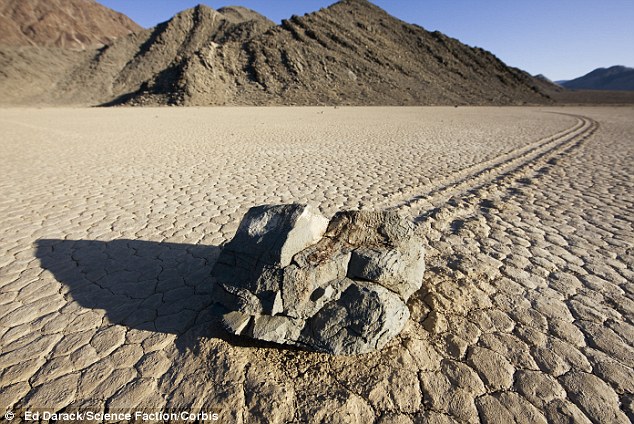 
Have geologists finally figured out how Death Valley’s ‘sailing stones’ move across the desert all by themselves?

A NASA geologist believes he has finally found the answer.

The sailing stones found in Death Valley, California, move across the desert all by themselves leaving trails on the dusky, cracked surface on the barren Racetrack Playa.

The rocks, some as big as 700 pounds, leave tracks of nearly 600 feet long. To date, no scientist has been able to record the rock physically moving. It is believed that no one has ever seen them in motion.

The ‘magic’ force behind these ‘sailing stones’ has been a mystery to scientists for nearly a century.  Now, is this mystery debunked?

The sailing stones of the Racetrack Playa in Death Valley have stumped scientists for nearly 100 years.

No one has actually been able to record the stones physically moving, but the trails they leave in the mudflats offers proof of the path that have taken.

The strange and wonderful movement of the stones in the barren expanse of Death Valley has led some visitors to claim magnetism, aliens and mysterious energy fields move the rocks. Some of the most superstitious believe that stones have magical properties.

Dr Ralph Lorenz’s theory indicates the rocks could move with only a slight breeze, under the right conditions, because the ice causes them to float – dramatically reducing their friction.  Like most geological phenomena, the mystery of the ‘sailing stones’ comes down to wind and water.

Lorenz devised his theory after a simple experiment on his kitchen counter. He froze a small rock in just enough water that a small amount of the stone was sticking out of the ice. He then flipped the stone upside down and placed it in a small pool of water with sand on the bottom. The ice allowed the stone to float just enough that it still touched the sand. Dr Lorenz found he could move the rock around simple by blowing it gently.

The dried lake bed of the Racetrack Playa greats the perfect conditions to allow the stones to ‘sail’. This stone appears to have changed direction midway through its course of sailing across the desert.