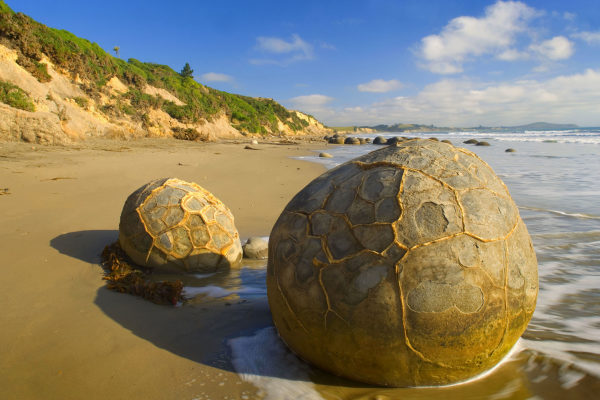 
The coast of Otago on the South Island of New Zealand is known for a strange and baffling nature phenomenon.

These giant stone concretions, called Moeraki Boulders, are the source of a multitude of legends and myths .

As their name implies, the Moeraki Boulders are found along a stretch of Koekohe Beach between Moeraki and Hampden.

These unusually large and spherical boulders are found either isolated or in groups and can reach a size of up to 2.5 meters (8.2 feet) in diameter.

The larger boulders are estimated to have taken 4 to 5.5 million years to grow while 10 to 50 metres (33 to 164 ft) of marine mud accumulated on the seafloor above them.

These stone balls contain mud, clay and fine clay, which are held together by calcite. Moreover, new specimen are always discovered.

While scientists have proven that the Moeraki Boulders are concretions created by the cementation of the Paleocene mudstone of the Moeraki Formation, from which they have been exhumed by coastal erosion, these strange calcite balls resulted in a multitude of legends and myths.

For example, the Maori believe that the moeraki balls represent the remains of eel baskets, sweet patatoes, and bottle gourds, coming from the wreck of the legendary giant canoe Arai-te-uru.

An Iceberg The Size of London Has Broken Free From Antarctica Ice Shelf : ScienceAlert
Sword Mistaken For Replica Is Actually An Ancient 3,000-Year-Old Weapon : ScienceAlert
Physicists Break Record Firing a Laser Down Their University Corridor : ScienceAlert
Dogs Can Be Aggressive For Lots of Reasons, And One of Them Is You : ScienceAlert
Babies May Not Be Born With a Microbiome After All, Scientists Say : ScienceAlert