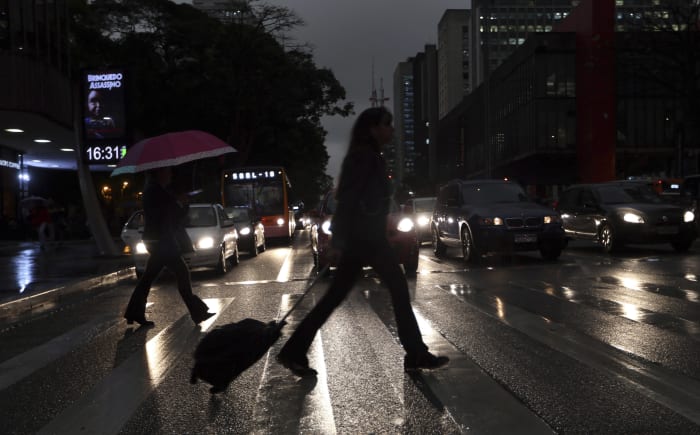 
This is another amazing but terrifying phenomenon.

Sao Paulo was plunged into darkness in the middle of the day Monday as a massive plume of smoke from fires burning in the Amazon descended on Brazil’s largest city, alarming residents as a record number of fires raged in the world’s largest tropical rainforest.

Wildfires can kill, cause explosions, burn hectares of forest… But the current forest fires in the Brazilian Amazon have done something I have never heard about… The smoke of the infernos have turned day into night around 3 p.m. and persisted for more than an hour in Sao Paulo, the largest city of Brazil.

The smoke of the deforestation fires not only plunged São Paulo into darkness on Monday, but was also visible from space by NASA satellites.

Officials with Brazil’s National Institute of Meteorology (Inmet) said the unnerving scene was the result of a combination of factors: cold, humid air, and smoke from unprecedented fires burning in the Amazon rainforest thousands of miles away.

“The particulate matter, coming from the smoke produced by these large wildfires that are happening in Bolivia, coupled with the cold, humid air that is off the coast of São Paulo, caused the darkness,” Franco Vilela, a meteorologist at Inmet, told Globo.

Josélia Pegorim, a meteorologist with Climatempo, explained that the cold front changed the direction of the winds and transported smoke billowing from fires in Bolivia in the Brazilian state of Rondônia to the region, resulting in a dense layer of low, heavy clouds and fog.

Mega Increase of Deforestation in Brazil

Atmospheric monitoring data from the World Meteorological Organization showed a massive smoke plume emanating from the rainforest fires had spread across Brazil and over the coastal area Tuesday.

From the other side of Earth, here’s the latest on the Amazonia fires ?

The darkness caused many on social media to express concerns over ongoing fires burning in world’s largest tropical forest, which some have dubbed the “lungs of the planet.”

?Just a little alert to the world: the sky randomly turned dark today in São Paulo, and meteorologists believe it’s smoke from the fires burning *thousands* of kilometers away, in Rondônia or Paraguay. Imagine how much has to be burning to create that much smoke(!). SOS? pic.twitter.com/P1DrCzQO6x

Brazil’s space research center, National Institute for Space Research (INPE), said Tuesday the number of fires detected in the Amazon so far this year had reached 72,843 — an 83% increase over the same period last year and the highest since the agency began recording the data in 2013, according to Reuters adn BBC.

According to preliminary data reported by the INPE, deforestation of the Amazon soared by about 67% through July of this year.

A record number of wildfires have torched the Amazon this year as deforestation efforts increase under Brazilian President Jair Bolsonaro.

Yes, just a little alert for the world! The world’s largest tropical forest, which some have dubbed the “lungs of the planet” is burning down.

Bacteria Can Use Plastic Waste as a Food Source, Which Isn’t as Good as It Sounds : ScienceAlert
Mysterious ‘Zone of Uncertainty’ Inside The Brain Reveals a Surprise : ScienceAlert
Dogs Can Be Aggressive For Lots of Reasons, And One of Them Is You : ScienceAlert
Lightning Strikes Create a Strange Form of Crystal Rarely Seen in Nature : ScienceAlert
Scans of Mummified ‘Golden Boy’ Reveal He Was Covered in Magical Protections : ScienceAlert