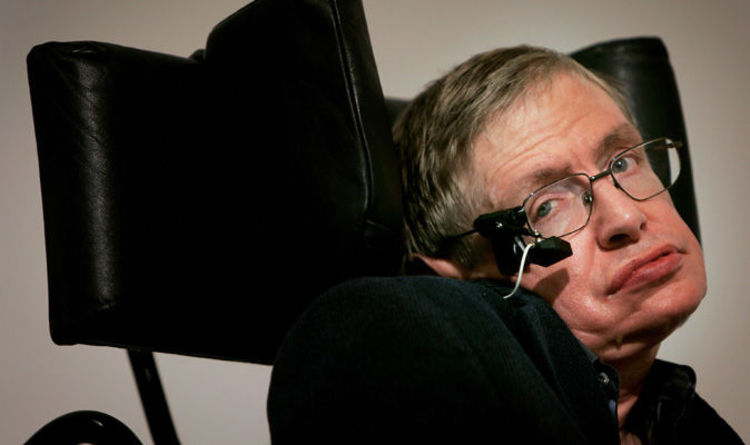 
The ashes of Prof Hawking are set to be buried between the remains of Charles Darwin and Isaac Newton after his memorial service today, June 15.

As a result, his family has the perfect send off for the world-famous physicist and plan to beam his voice to the nearest black hole.

The theoretical physicist, who died on March 14 at the age of 76, most important work came in deciphering the structure of black holes in 1974 which is why friends and family decided on the fitting farewell.

A voice message from Prof Hawking has been set to music by composer Vangelis, whose most famous work was writing the theme song to Chariots of Fire.

Lucy Hawking, one of Stephen Hawking’s children, told the BBC: “The broadcast will be beamed towards the nearest black hole, 1A 0620-00, which lives in a binary system with a fairly ordinary orange dwarf star.

“It is a message of peace and hope, about unity and the need for us to live together in harmony on this planet.”

She added that the music which was chosen to play alongside Prof Hawking’s words is a “beautiful and symbolic gesture that creates a link between our father’s presence on this planet, his wish to go into space and his explorations of the universe in his mind.”

Familiar faces will be giving readings during the memorial service, including British astronaut Tim Peake and actor Benedict Cumberbatch who played Stephen Hawking in the 2004 biopic ‘Hawking’, becoming the first actor to play the theoretical physicist on the big screen.

An AI Found an Unknown ‘Ghost’ Ancestor in The Human Genome : ScienceAlert
Cannabis For Pain Relief? Review of 20 Studies Provides Sobering Results : ScienceAlert
A Tobacco Plant Has Been Engineered to Produce Cocaine in Its Leaves : ScienceAlert
Octopus Brains Evolved to Share a Surprising Trait in With Our Brains : ScienceAlert
These Mysterious Fungi Belong to an Entirely New Branch on The Tree of Life : ScienceAlert