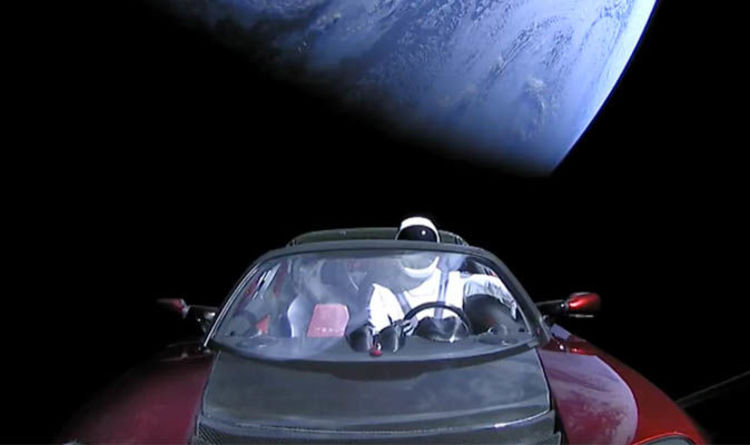 
In one of the most unusual sights ever caught on camera, a cherry-red sports car was filmed barrelling though the atmosphere at breakneck speeds towards Mars.

SpaceX successfully carried out its test flight of the Falcon Heavy rocket with one of billionaire Elon Musk’s electric cars in the payload cargo.

The Falcon Heavy took off from the Kennedy Space Center in Cape Canaveral, Florida, shortly after 3.45pm EST (8.45pm GMT).

The thrilling 10 second countdown to launch was cheered on by the thousands of space boffins and astronomy enthusiast who watched the launch live.

The Tesla Roadster is now speeding towards the Red Planet with David Bowie’s hit song “Space Oddity” playing on loop.

The car was last seen on SpaceX’s live broadcast of the launch, flying over the breathtaking blue planet below it, before the stream cut out.

You can now watch ‘Starman’ on his journey toward Mars in the SpaceX live stream below.

Mr Musk, SpaceX founder and the mastermind behind this grandiose space mission, was hopeful that the Heavy’s maiden voyage will pave the way for future manned missions to Mars.

Mr Musk later tweeted out a video of the car in orbit around Earth, captured from SpaceX’s mission control.

You can now relive the whole endeavour thanks to SpaceX’s live broadcast of the Falcon Heavy launch.

The Falcon Heavy is a monumental long-distance rocket with an impressive array of 27 Merlin engines and three reusable Falcon 9 boosters.

The rocket’s cargo bay can carry up to 60 tonnes of material into Low Earth Orbit and up to 17 tonnes as far as Mars.

Shortly after breaching the atmosphere the Falcon 9 boosters touched down back on Earth to be repurposed in future missions.