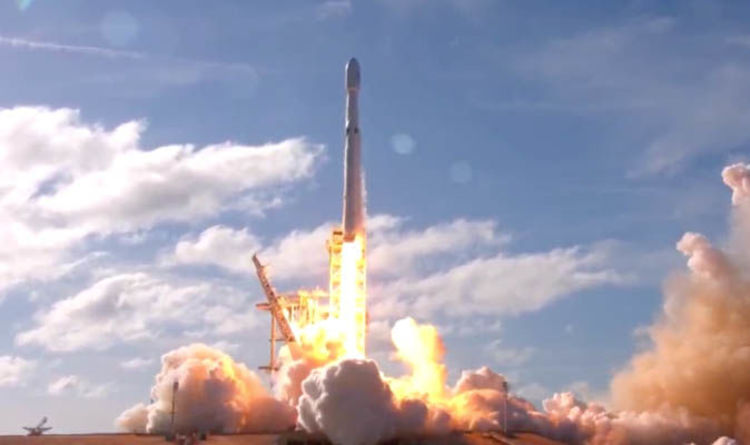 
SpaceX was cheered on by thousands of avid rocket enthusiasts when ground control began its 10 second countdown to lift off.

The Falcon Heavy and Tesla sports car are now speeding through space on their journey to Mars, all to the soundtrack of David Bowie.

Those who have missed the roaring Merlin engines of the Falcon Heavy in person, can now re-live the thrilling moment in video.

SpaceX streamed live the entire event earlier today, broadcasting around the world the moment the rocket broke out into the atmosphere.

Keen observers even caught a glimpse of the rocket’s unusual payload, as the spacecraft barrelled towards the Red Planet.

Ahead of the launch, SpaceX founder Elon Musk teased: “Test flights of new rockets usually contain mass simulators in the form of concrete or steel blocks. That seemed extremely boring.

With a total of 27 engines, three Falcon 9 boosters and the capacity to carry 17 tonnes worth of cargo to Mars, the Falcon Heavy will pave the way for future manned missions.

Once the rocket arrives at Mars, it will enter into an elliptical path around the planet, circling the sun for a mind blowing one billion years.

SpaceX was also praised today for pioneering the technology behind reusable rockets.

Just minutes after breaking off from the payload, the three Falcon 9 boosters successfully touched down back on Earth without a hitch.

The rocket manufacturer tweeted shortly after they landed back in Florida: “Falcon Heavy side cores have landed at SpaceX’s Landing Zones 1 and 2.”

The scientist said: If all this works and all three pieces of the Falcon Heavy return to base it will be the coolest thing – and a significant step on the road to creating a spacefaring civilisation.

A Common ‘Forever Chemical’ Has Just Been Linked to Liver Cancer in Humans : ScienceAlert
Astronomers Charted The Sun’s Life, And This Is How The Story Ends : ScienceAlert
Robot Shows It’s Possible to Swim Through The Emptiness of a Curved Universe : ScienceAlert
An Experimental Surgical Robot Is Headed to The International Space Station
Extreme Drought in Italy Reveals Hidden Bomb Submerged in River Since WWII