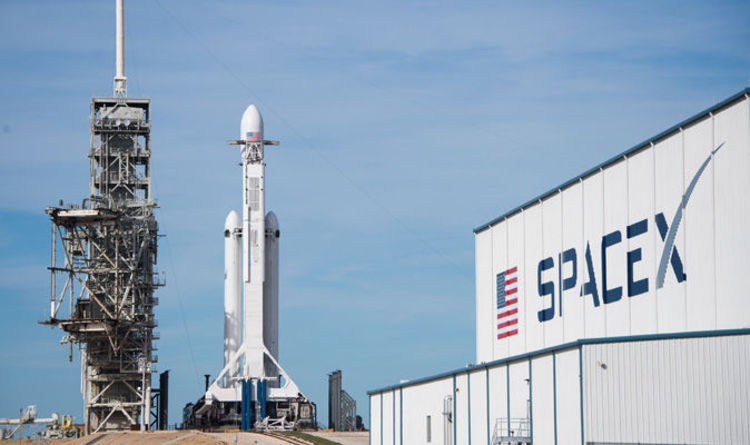 Elon Musk’s SpaceX will launch the Falcon Heavy rocket from the Kennedy Space Center in Florida, with a launch window of between 6.30pm GMT (1.30pm local time EST) and 9pm GMT (4pm EST).

The rocket that SpaceX is set to launch has a thrust power of 2500 tons – the equivalent of 18 Boeing 747 aircraft at full throttle.

The rocket is twice as powerful as any other rocket that has ever been created before and can carry up to 140,000 pounds of cargo.

Rather than carrying a customers’ payload, the Falcon Heavy will carry a “cherry Tesla Roadster” to orbit Mars, playing David Bowie’s ‘Space Oddity’ on repeat. The firm said it would “be in deep space for a billion years or so”.

All time stamps are GMT.

The Falcon Heavy is set to launch from Florida

SpaceX’s successful launch of its Falcon Heavy rocket has been described as a “big relief” by co-founder Elon Musk.

The US entrepeneur had only given the launch a 50 percent chance of liftoff and told reporters afterwards: “I had this image of this giant explosion on the pad, with wheels bouncing down the road and the logo landing somewhere with a thud.”

He added: “But fortunately, that’s not what happened. Crazy things come true.”

Mr Musk later tweeted out a video of the the Tesla Roadster heading towards Mars with one of his electric cars in the payload cargo and David Bowie’s hit song “Space Oddity” playing on loop.

The car was last seen on SpaceX’s live broadcast of the launch, flying over the breathtaking blue planet below it, before the stream cut out in orbit around Earth, captured from SpaceX’s mission control.

Mr Musk says he is now hoping for a “space race” by private ventures and other countries – a nod to the 1960s Cold War contest between the United States and the Soviet Union.

SpaceX has praised its ‘outstanding’ Falcon Heavy launch, which it says went according to plan.

The liftoff saw the spacecraft blasted into space above the Kennedy Space Centre in Florida.

The rocket’s two side boosters, which detached from the main rocket miles above the earth, successfully returned to landing pads close to their takeoff point.

The rocket’s core was due to land on a drone ship in the Atlantic, though as the stream ended the core had still not touched down.

It is not yet known whether it was able to successfully land on the boat. 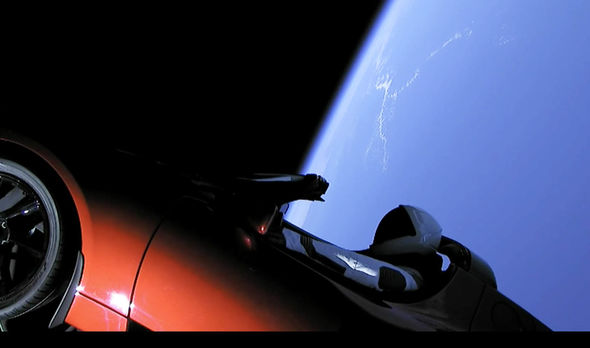 The SpaceX Falcon Heavy is undergoing its final preparations for launch at 8.45pm GMT.

The rocket is currently being fuelled ahead of liftoff.

With less than 20 minutes to go before liftoff the live feed from Florida has come to life.

Flight engineers say all systems on the Falcon Heavy are ready for launch.

You can watch the SpaceX launch here. 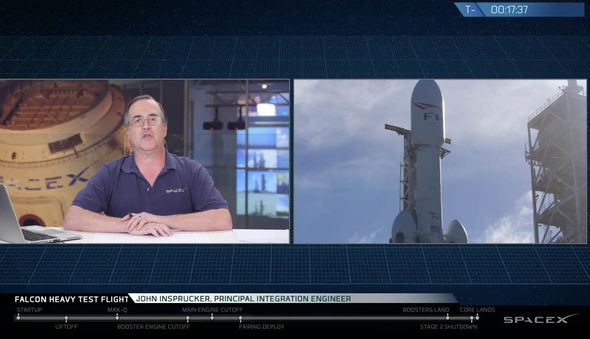 The SpaceX Falcon Heavy launch stream is live ahead of liftoff

There have been no further updates from SpaceX since its official Twitter account posted liftoff would take place in an hour.

The official SpaceX stream is running a countdown to launch and shows exactly 30 minutes left.

SpaceX has just tweeted to announce the Falcon Heavy launch will take place in an hour.

“Launch webcast will go live about 20 minutes before liftoff.”

The launch time is still set for 8.45pm GMT (3.45pm EST), which is at the very end of the scheduled launch window.

We FINALLY have official confirmation from SpaceX that the launch is now scheduled for 8.45pm GMT (3.45pm EST local time).

But, in a tweet from the company, they say they will “continue to monitor the upper level wind shear.”

Reports coming from the launchpad now that there are delays until 8.45pm GMT (3.45pm local time).

However, SpaceX are going to continue to monitor the upper atmosphere winds, and will re-evaluate shortly.

6.33pm – Still nothing official from SpaceX

Everyone is holding their breath waiting for an official update from SpaceX but nothing seems to be coming.

Journalists at the scene say a 8.15pm GMT launch is now hoped for.

However, the offical launch window closes at 9pm GMT (4pm local time), so if it is to happen today, Elon Musk and co are cutting it thin.

Former International Space Station astronaut Scott Kelly seems to give us to confirmation that we need.

He posts on Twitter that the launch has been delayed until 8.05pm GMT.

SpaceX tweeted that there are more delays and the launch will go ahead at 8.05pm GMT, but then quickly deleted the tweet.

Seems to be a bit of confusion as to what is going on, and people are now really beginning to fear that it will not happen today.

Although there is still no official word from SpaceX or Elon Musk, reporters at the launch are claiming that there have been even further delays.

People at the scene state that the launch time will now be 8.05pm GMT (3.05pm local time).

With an hour and 20 minute delay on the cars, a bit of anxiety is beginning to seep in that the launch might not happen at all today.

You just let me know if I can help with something.

Reports are coming in that there are now further delays to the launch.

Ere Kelly of Florida Today says on Twitter that the launch time will now be after 7.50pm GMT.

An update on the launch delay, Elon Musk says that wind speeds in the upper hour are “currently 20% above max allowable load”.

As a result SpaceX will delay the launch of the Falcon Heavy for an hour to “allow winds to diminish”.

Conditions need to be as close to perfect as possible for the launch to go ahead.

High winds are the reason behind the3 delay but SpaceX remain optimistic that it will go ahead.

Elon Musk is certainly getting excited about the impending launch, and rightly so.

The latest tween from the South African-born billionaire shows the projected flight path.

As mentioned earlier, the weather will not be responsible if the test flight fails.

Here are all of the various launch times around the globe courtesy of NASA scientist Jason Major.

No matter where you are in the world, if you have access to the internet, you will not want to miss this historic test flight either here at Express.co.uk or on the SpaceX website.

Either it will be a success or, as Mr Musk put it, it will be an amazing fireworks display.

As we ebb closer to lift off for the test flight – and it is important to remember that this is just a test flight so chances of failure are high – Elon Musk has sent out his first tweet of the day.

Included in his tweet is a lovely video about what SpaceX hopes will happen during the launch of the Falcon Heavy.

About 2.5 hours to T-0 for Falcon Heavy. Watch sim for highlight reel of what we hope happens. Car actually takes 6 months to cover 200M+ miles to Mars https://t.co/tC3B26r651

Less than two and a half hours until the Falcon Heavy is scheduled to launch and SpaceX say that two of the rockets have been used before.

Here are some interesting stats ahead of todays launch.

The information comes courtesy of Michael Baylor, a writer for NASA Space Flight.

One of the original conquerers of space has sent his well wishes to Elon Musk, who is surely the future of space travel.

Buzz Aldrin, who was part of the Apollo 11 mission which saw the first humans step on the moon in 1969, is at the Kennedy Space Center and has tweeted his viewing from the Sunshine State, which is living up to its name.

Not letting SpaceX take all the credit, NASA is looking to get in on the act by tooting its own horn.

Although fairly, you must say.

The Kennedy Space Center is “continuing to grow as the nation’s premier multi-user spaceport”, according to the space agency in a Tweet.

Today’s launch of a SpaceX Falcon Heavy rocket on its demonstration flight is another sign NASA Kennedy is continuing to grow as the nation’s premier multi-user spaceport. We have partnered with over 90 companies to enable commercial space. Read more: https://t.co/HGLI8jkKEz pic.twitter.com/Za0u18zSBh

A lot of people in Florida are hoping to watch the launch of the Falcon Heavy from the Kennedy Space Center.

With a little less than four hours remaining until lift off, there are apparently cars queuing for miles, hoping to get a seat at the launchpad in Florida.

Jeff Foust, senior writer for Space News, just tweeted: “For those going to the KSC Visitor Center: there’s a backup of a few miles on the main road leading there in the right lane. Be prepared to wait in traffic for a while.”

For those going to the KSC Visitor Center: there’s a backup of a few miles on the main road leading there in the right lane. Be prepared to wait in traffic for a while. (Left lane is clear for traffic heading into KSC itself.)

Famed physicist Brian Cox says that, if all goes to plan with the launch, this could be humanity’s biggest step towards creating an interplanetary species.

Dr Cox wrote on Twitter: “If all this works and all three pieces of the Falcon Heavy return to base it will be the coolest thing – and a significant step on the road to creating a spacefaring civilisation.

“Even if it doesn’t work this time we’ll learn a great deal. Good luck @SpaceX!”

If all this works and all three pieces of the Falcon Heavy return to base it will be the coolest thing – and a significant step on the road to creating a spacefaring civilisation. Even if it doesn’t work this time we’ll learn a great deal. Good luck @SpaceX ! https://t.co/e3PISvciAn

Elon Musk says that there is just a 50/50 chance of the launch being a success, but that might not be so reassuring to future space travellers.

The SpaceX website says: “Falcon Heavy was designed from the outset to carry humans into space and restores the possibility of flying missions with crew to the Moon or Mars.”

With that in mind, it might be fair to say that all budding astronauts are hoping for the rocket to succeed.

Even SpaceX’s rivals have been wishing the company well ahead of the impending launch.

Fellow billionaire Jeff Bezos, owner of Amazon and Blue Origin – which attempting to get to the moon – wished Elon Musk and SpaceX well on social media.

The weather could almost be described as perfect for a launch over the Kennedy Space Center, in Florida, right now.

The temperature there is a pleasant 18 degrees celsius, and with wind speeds of just 4 miles per hour, the weather cannot be blamed if something goes wrong during lift off.

Wind speeds might pick up to around 7 miles per hour throughout the day, but for a rocket which has so much thrust, this will not be a problem.