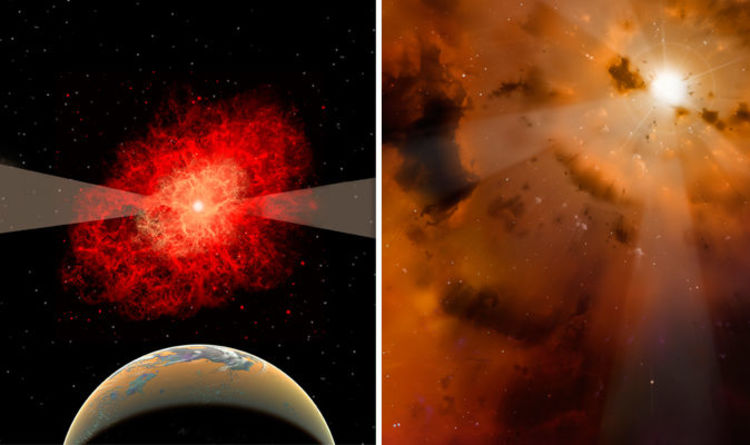 Harmful ionising radiation can sterilise nearby inhabited planets and one researcher wanted to discover if it was the cause for mass extinction on Earth based on geologic evidence of nearby supernovae.

Astrophysicist at Washburn University in Kansas Brian Thomas investigated cosmic rays from the supernovae as they propagated through the atmosphere to the surface to understand their effect on living organisms.

Speaking to Astrobiology Magazine, Mr Thomas said: “There were changes, especially in Africa, which went from being more forested to more grassland.

“We are interested in how exploding stars affect life on Earth, and it turns out a few million years ago there were changes in the things that were living at the time.

During the time period, geologic records show an elevated global concentration of Iron-60 which is a radioactive isotope produced during a supernova.

There was a change in the abundance of species during the Pliocene-Pleistocene period.

No major mass extinctions happened but there was a higher rate of extinction in general.

He used global climate models, recent atmospheric chemistry models and radiative transfer (the propagation of radiation through the layers of the atmosphere) to investigate and better understand how the flux of cosmic rays from supernovae would alter Earth’s ozone layer.

Mr Thomas told Astrobiology Magazine supernovae does not blast everything at once.

Instead the intergalactic medium acts as a kind of sieve, slows down the arrival of cosmic rays and “radioactive iron rain” over hundreds of thousands of years.

A decrease in ozone could be a concern for life on the surface.

When asked if nearby supernovae will result in mass extinctions, Mr Thomas said it depends.

He added: “There is a subtler shift; instead of a ‘wipe-out everything,’ some organisms are better off and some are worse off.”

For example plants showed increase yield, like soybean and wheat, while others showed reduced productivity.

Referring to the changes in species in the fossil record, Mr Thomas said “it fits”.

Computational physicist at the Blue Marble Space Institute of Science in Seattle Dimitra Atri said: “This work is an important step towards understanding the impact of nearby supernovae on our biosphere.”

Mummies With Golden Tongues Discovered in Ancient Egyptian Necropolis : ScienceAlert
Astronomers Spot The Biggest Galaxy Ever, And The Scale Will Break Your Brain : ScienceAlert
We May Finally Know How Lightning Gets Its Zigzag Shape : ScienceAlert
Lyme Disease Is on The Rise, But There Might Be Hope in a New Vaccine : ScienceAlert
Engineers Propose an Ambitious Plan to Bury Excess Carbon at The Bottom of The Ocean : ScienceAlert