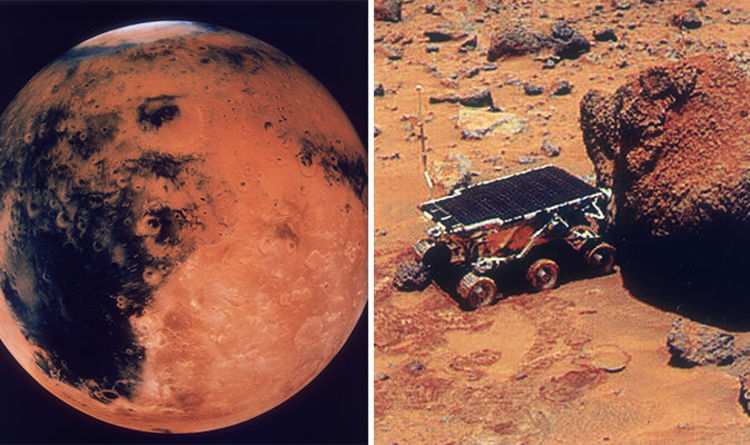 
After the “building blocks of life” were uncovered on the Red Planet, life on Mars seems to be becoming more close to reality, he claimed.

The scientist said: ”Now, we see Mars is an even better location for having past life.

“It’s just getting better and better.”

Research shows Mars is the most Earth-like planet in our solar system.

The plan is to send someone to the planet by 2040.

But this would be dependent on NASA being able to land a 10-ton vehicle on the Red Planet.

Currently, the space agency is only able to land a 1-ton vehicle on the martian land.

NASA are also still yet to work out a way to take off from Mars.

Mr Green told USA Today: “Sometime in the next decade, we plan to blast off the surface of Mars and return.”

Humans would need to wear space suits as the weather on the Red Planet is so extreme.

The difference between Monday and Tuesday could differ exponentially and the average temperature is way below zero degrees Fahrenheit.

The air is also mostly carbon dioxide which is bad for humans.

Every six months the martian planet also has a dust storm season.

These storms, made up of fine dust that gets caught in the atmosphere can darken daylight to a twilight stage which can last for months.

Mr Green said: “The people that would go there are real pioneers.”

The first humans would need to farm and establish a food source in order to survive.

Scientists believe asparagus, beans and potatoes are viable crops to grow on the planet.

Homes and infrastructure would also need to be built.

Mr Green concluded by saying 3D printers might be able to use dust on the planet to create habitats.

A ‘Wormhole’ Built on a Quantum Computer Teleported Information as Predicted : ScienceAlert
Mars Once Had So Much Water, It Could Have Been An Ocean World, Scientists Say : ScienceAlert
A Tobacco Plant Has Been Engineered to Produce Cocaine in Its Leaves : ScienceAlert
We May Finally Know How Lightning Gets Its Zigzag Shape : ScienceAlert
Crocodiles Seem to Be Thriving in a Toxic River That’s More Like a Sewer. Here’s Why : ScienceAlert