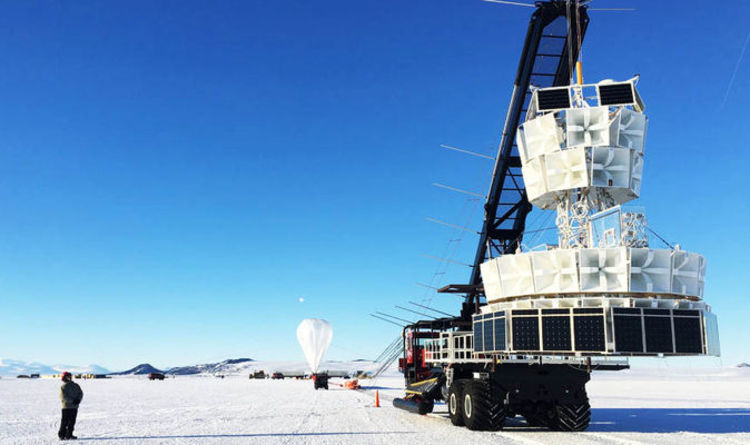 
Possible explanations for the bizarre phenomenon, which was first recorded in 2006, include that they are a completely new particle or potentially the product of dark matter.

But a third theory, unveiled in a research paper last month, suggests the phantom rays could actually be elusive ‘supersymmetricals’ – minute particles which are capable of passing cleanly through matter without interacting with it at all.

The long-sought particles have eluded scientists for years – including the team at the Large Hadron Collider, which has predicted their existence but not been able to observe them.

And if their existence is proved, they would break the rules of the long-established Standard Model of physics, the most accurate description of the universe humans have ever known.

The strange cosmic rays were first spotted shooting out of Antarctica during a 2006 experiment to monitor cosmic rays showering the Earth from space.

During the tests, NASA-affiliated researchers observed a phenomenon that they were unable to explain: Cosmic rays being emitted from the ground.

Data was collected through the Antarctic Impulsive Transient Antenna (ANITA), a high-tech balloon designed to monitor cosmic neutrinos while floating over Antarctica.

But during its maiden flight in 2006, ANITA’s specialist instruments recorded a cosmic ray coming from below.

The balloon recorded the same phenomenon again in 2014.

Cosmic rays are high-energy fragments of atoms which travel through space at close to the speed of light. They are thought to come from clusters of massive stars.

Billions of the particles shower the earth every day, and physicists believe they are capable of penetrating the Earth’s surface.

But according to the Standard Model, they should not be able to pass all the way through the planet and shoot out of the other side.

Last month, a research paper from a group of researchers led by the Pennsylvania State University physicist Derek Fox proposed a new theory for the strange particles detected by ANITA.

The study suggests that the rays picked up by the balloon were in fact the first evidence of supersymmetric particles.

Mr Fox acknowledged that the theory is just one interpretation of the strange data recorded by ANITA, according to Motherboard.

But the researchers also analysed much more comprehensive data from the IceCube Neutrino Observatory in the Arctic and discovered three occurrences of the phantom particles.

The researchers are now hoping to gather more data from ANITA’s most recent mission in 2016.

Of the study, Mr Fox said: “From my perspective, I go trawling around trying to discover new things about the universe, I come upon some really bizarre phenomenon, and then with my colleagues, we do a little literature search to see if anybody has ever thought that this might happen.

“And then if we find papers in the literature, including one from 14 years ago that predict something just like this phenomenon, then that gets really high weight from me.”

A Common ‘Forever Chemical’ Has Just Been Linked to Liver Cancer in Humans : ScienceAlert
The Moon Stole Something From Deep Inside Earth Eons Ago, and Scientists Can Prove It : ScienceAlert
Thinking Hard and Long Can Cause Brain Drain : ScienceAlert
‘Structured Water’ Is Not What People Claim. Don’t Believe The Hype, Scientist Says
New Predictions Reveal The Fate of The World’s Biggest Ice Sheet if We Don’t Act : ScienceAlert