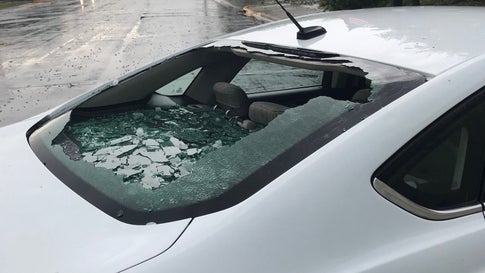 
Hail the size of baseballs, tennis balls, and grapefruit slammed Watertown and Delano near the Twin Cities, Minnesota on August 5, 2019.

A supercell thunderstorm that developed near Hutchinson quickly intensified early Monday afternoon and produced very large hail from Watertown to Delano and up through the northwest metro area.

In Watertown and Delano, hail the size of tennis balls, baseballs and even one report of a grapefruit-sized hailstone have been reported.

@wxbrad pictures of hail from friends in Delano, MN (taken moments ago). pic.twitter.com/JALl2f83Fh

The hail was big enough – and fell hard enough – to break windows in Watertown.

Here a video compilation with pictures:

This first wave of storm was followed by another severe thunderstorm watch in effect until 10 p.m., with damaging wind gusts to 70 mph and large hail to very large hail.

That hailstorm near the Twin Cities in Minnesota was probably insane to experience! Always be prepared.