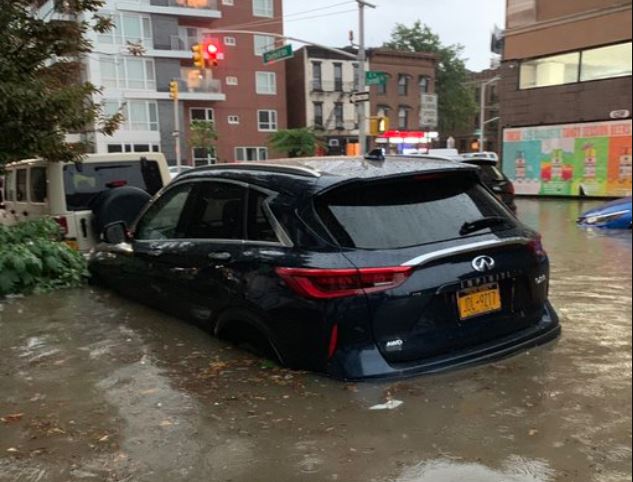 
After the heat wave, the deluge!

A severe thunderstorm has hit parts of New York, where tourists and locals are bracing themselves for more flash flooding after a warning was issued.

Already, streets and subways are experiencing flash floods after the area has experienced extremely high temperatures of more than 30C, over the last three days.

The National Weather Service issued severe thunderstorm warnings and watches, and a flash flood warning for Manhattan, Queens and Brooklyn.

Photos and videos uploaded to social media have shown people walking in water that is above their knees, as they try to cross local streets.

In Williamsburg, Brooklyn, footage showed one woman attempting to walk in the flood waters.

Commuters have been advised to continue to watch out for street and subway flooding.

This is so dangerous #mta pic.twitter.com/2fX0dpth3L

Well that’s a natural way of washing the trains:

New Yorkers have been told to never drive through flooded areas. But still some do:

Showers with thunderstorms are expected to develop and move across the area today through early Tuesday.

At 4th Ave and Carroll Street in Brooklyn. Courtesy of Adrienne Zhao pic.twitter.com/wEU4RFwqfQ

Multiple rounds of thunderstorms and heavy rainfall will be possible. Rainfall totals of around 1.5 to 2 inches are expected with locally higher amounts possible.

Flash flooding will be possible, especially in areas of poor drainage, low-lying areas, and in urban areas. Fast reacting rivers and streams may flood as well.

The wet weather comes after Mayor de Blasio said on Monday there were about 19,000 people still without power after a local utility company reportedly decided to turn the power off for thousands of customers to prevent a bigger power outage during the weekend’s heatwave that hit the city.

New Prototype Device Generates Hydrogen From Untreated Seawater : ScienceAlert
Ancient Goo Spills The Secrets of How The Egyptians Mummified Their Dead : ScienceAlert
We Used to Hate Commuting. Now We Realize We’ve Lost Something. : ScienceAlert
Our Body Temps Have Been Dropping For 160 Years. Gut Microbes May Be Playing a Role : ScienceAlert
Astronomers Find What May Be a Habitable World 31 Light-Years Away : ScienceAlert